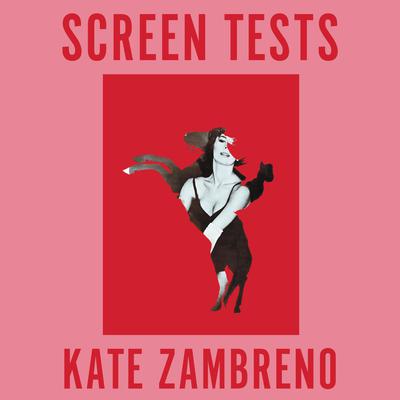 Screen Tests: Stories and Other Writing

In Screen Tests, an astoundingly original and stylish collection, Zambreno has once again created new categories of writing, of vivid and surprising language and thought. In the first half, the narrator regales us with incisive and witty swatches from a life lived inside a brilliant mind, meditating on aging and vanity, fame and failure, writing and writers, and the dailiness of a woman and an artist, along with Warholian portraits of everyone from Susan Sontag to Amal Clooney, Maurice Blanchot to Louise Brooks. The series of essays that follow, on figures central to her thinking, from Kathy Acker to Shulamith Firestone, David Wojnarowicz to Barbara Loden, are passionate manifestoes about art, that intersect and chime with the stories that came before them. Throughout these philosophical investigations is the quintessential Zambreno voice, unable to be imitated—witty and morbid, serious and playful, poetic and profane, doubting yet radiant.

“A delicate and ephemeral and wonderful portrait of how a particular mind functions.” —Brian Evenson, author of A Collapse of Horses

Kate Zambreno is a novelist and cultural critic. She is also the author of two novels, a collection of talks, and two other books of nonfiction. She lives in New York and teaches writing at Columbia University and Sarah Lawrence College.