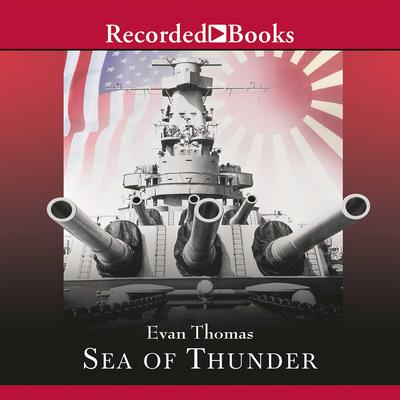 Evan Thomas takes us inside the naval war of 1941-1945 in the South Pacific in a way that blends the best of military and cultural history and riveting narrative drama. He follows four men throughout: Admiral William ("Bull") Halsey, the macho, gallant, racist American fleet commander; Admiral Takeo Kurita, the Japanese battleship commander charged with making what was, in essence, a suicidal fleet attack against the American invasion of the Philippines; Admiral Matome Ugaki, a self-styled samurai who was the commander of all kamikazes and himself the last kamikaze of the war; and Commander Ernest Evans, a Cherokee Indian and Annapolis graduate who led his destroyer on the last great charge in the last great naval battle in history. Sea of Thunder climaxes with the Battle of Leyte Gulf, the biggest naval battle ever fought, over four bloody and harrowing days in October 1944. We see Halsey make an epic blunder just as he reaches for true glory; we see the Japanese navy literally sailing in circles, torn between the desire to die heroically and the exhausted, unacceptable realization that death is futile; we sail with Commander Evans and the men of the USS Johnston into the jaws of the Japanese fleet and exult and suffer with them as they torpedo a cruiser, bluff and confuse the enemy -- and then, their ship sunk, endure fifty horrific hours in shark-infested water. Thomas, a journalist and historian, traveled to Japan, where he interviewed veterans of the Imperial Japanese Navy who survived the Battle of Leyte Gulf and friends and family of the two Japanese admirals. From new documents and interviews, he was able to piece together and answer mysteries about the Battle of Leyte Gulf that have puzzled historians for decades. He writes with a knowing feel for the clash of cultures. Sea of Thunder is a taut, fast-paced, suspenseful narrative of the last great naval war, an important contribution to the history of the Second World War.

Evan Thomas is the author of several bestselling works of history and biography, including The War Lovers and Sea of Thunder. He was a writer and editor at Time and Newsweek for more than thirty years, and he is frequently a commentator on television and radio. He teaches at Princeton University and lives in Washington, DC.