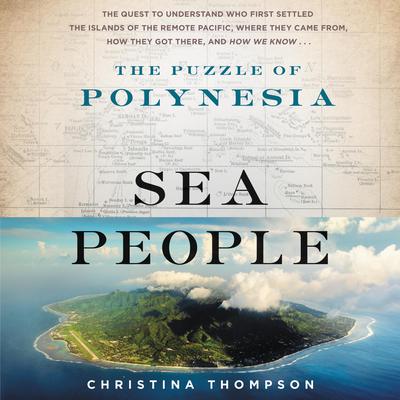 Sea People: The Puzzle of Polynesia

A blend of Jared Diamond’s Guns, Germs, and Steel and Simon Winchester’s Pacific, a thrilling intellectual detective story that looks deep into the past to uncover who first settled the islands of the remote Pacific, where they came from, how they got there, and how we know.

For more than a millennium, Polynesians have occupied the remotest islands in the Pacific Ocean, a vast triangle stretching from Hawaii to New Zealand to Easter Island. Until the arrival of European explorers they were the only people to have ever lived there. Both the most closely related and the most widely dispersed people in the world before the era of mass migration, Polynesians can trace their roots to a group of epic voyagers who ventured out into the unknown in one of the greatest adventures in human history.

How did the earliest Polynesians find and colonize these far-flung islands? How did a people without writing or metal tools conquer the largest ocean in the world? This conundrum, which came to be known as the Problem of Polynesian Origins, emerged in the eighteenth century as one of the great geographical mysteries of mankind.

For Christina Thompson, this mystery is personal: her Maori husband and their sons descend directly from these ancient navigators. In Sea People, Thompson explores the fascinating story of these ancestors, as well as those of the many sailors, linguists, archaeologists, folklorists, biologists, and geographers who have puzzled over this history for three hundred years. A masterful mix of history, geography, anthropology, and the science of navigation, Sea People combines the thrill of exploration with the drama of discovery in a vivid tour of one of the most captivating regions in the world.

“I found Sea People the most intelligent, empathic, engaging, wide-ranging, informative, and authoritative treatment of Polynesian mysteries that I have ever read.” —Dava Sobel, #1 New York Times bestselling author
“In this artfully written book, Thompson ably elucidates changing understandings of the ancient Polynesian migrations…This fascinating work could prove to be the standard on the subject for some time to come.” —Publishers Weekly (starred review)
“Ultimately, the author makes clear that the original settlers were not just blown about by currents and winds; they keenly navigated using star paths, ocean swells, and other land-finding techniques like bird-watching. Thompson vividly captures the wondrousness of this region of the world as well as the sense of adventure tied up in that history.” —Kirkus Reviews

Christina Thompson is the editor of The Harvard Review, a literary journal published by Houghton Library at Harvard University. Her memoir Come on Shore and We Will Kill and Eat You All, which was shortlisted for the 2009 NSW Premier’s Award and the 2010 William Saroyan International Prize for Writing. A dual citizen of the United States and Australia, she is the recipient of fellowships from the National Endowment for the Arts, Arts Victoria, and the Literature Board of the Australia Council. In 2015 she received one of 36 inaugural National Endowment for the Humanities Public Scholar Awards for this book. Her essays and reviews have appeared in a wide range of scholarly and popular publications, including Vogue, the American Scholar, the Journal of Pacific History, and three editions of Best Australian Essays. She writes regularly for the books pages of the Boston Globe.

Christina received her BA from Dartmouth College and her PhD from the University of Melbourne. From 1994 to 1998 she was editor of the Australian literary journal Meanjin. She teaches in the writing program at Harvard Summer School and Harvard University Extension, where she was awarded the James E. Conway Excellence in Teaching Award in 2008. She is married to Tauwhitu Parangi, a member of the Ngati Rehia hapu of the Nga Puhi tribe of Aotearoa (New Zealand), with whom she has three sons.