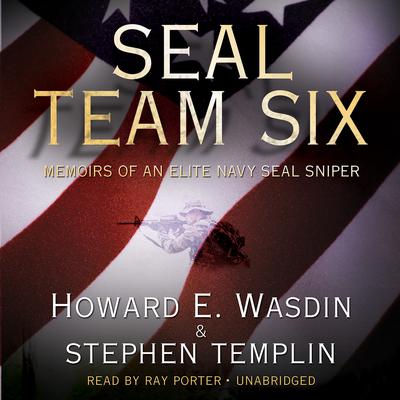 When the navy sends their elite, they send the SEALs. When the SEALs send their elite, they send SEAL Team Six—a secret unit tasked with counterterrorism, hostage rescue, and counterinsurgency. In this dramatic, behind-the-scenes chronicle, Howard Wasdin takes readers deep inside the world of navy SEALs and Special Forces snipers, beginning with the grueling selection process of Basic Underwater Demolition/SEAL—the toughest and longest military training in the world.

After graduating, Wasdin faced new challenges. First, there was combat in Operation Desert Storm as a member of SEAL Team Two. Then, the Green Course: the selection process to join the legendary SEAL Team Six (ST6), with a curriculum that included everything from practiced land warfare to unarmed combat. More than learning how to pick a lock, they learned how to blow the door off its hinges. Finally, as member of ST6, he graduated from the most storied and challenging sniper program in the country: the Marine Corps Scout Sniper School. Eventually, of the eighteen snipers in ST6, Wasdin became the best—which meant one of the best snipers on the planet.

Less than half a year after sniper school, he was fighting for his life. The mission: capture or kill Somalian warlord Mohamed Farrah Aidid. From rooftops, helicopters, and alleys, Wasdin hunted Aidid and killed his men whenever possible. But everything went quickly to hell when his small band of soldiers found themselves fighting for their lives, cut off from help and desperately trying to rescue downed comrades during a routine mission. The Battle of Mogadishu, as it became known, left eighteen American soldiers dead and seventy-three wounded. Howard Wasdin had both of his legs nearly blown off while engaging the enemy. His explosive combat tales and inside details of becoming one of the world’s deadliest snipers combine to make this the most thrilling and important memoir by a navy SEAL since Lone Survivor.

“SEAL Team Six is a masterful blend of one man’s—Waz-Man’s—journey from hard knocks to hard corps. Even better, Waz-Man and Templin can actually write as good as they can shoot. They capture your attention at every turn—not knowing if you’re about to take a bullet to the head from a SEAL sniper or get hit in the gut with a punch line.” —Dalton Fury, former Delta Force commander and New York Times bestselling author of Kill Bin Laden
“Wasdin is a true warrior and real hero. SEAL Team Six is a must-read.” —Gunnery Sgt. Jack Coughlin, USMC, New York Times bestselling author of Shooter
“Mr. Wasdin’s narrative is visceral and as action packed as a Tom Clancy thriller…[It] will also leave readers with a new appreciation of the training that enabled SEAL Team Six to pull off the bin Laden raid with such precision…Adrenaline-laced.” —New York Times
“SEAL Team Six pulses with the grit of a Jerry Bruckheimer production…On his journey to becoming a member of the navy’s best of the best, Wasdin proved his mettle in Operation Desert Storm and endured training that would break the back of most mortal men.” —Washington Post
“[SEAL Team Six] describes the harrowing ops he undertook as part of the elite SEAL Team Six squadron, including the 1993 Battle of Mogadishu that almost killed him…Reveals an intimate look at the rigorous training and perilous missions of the best of the navy’s best.” —Time
“It’s an engrossing story, and Ray Porter's narration is exactly right. The physical demands of SEAL training exceed anything most of us can imagine. Let's just say that most trainees don't make it. Wasdin did. His tales of training and combat are tough and fascinating. Porter's reading is perfect for the material: straightforward, well paced, and unembellished. When needed, he adds other voices and accents. But the story is key, and that's what Porter delivers.” —AudioFile
“Wasdin gives a good sense of how confronting warfare and bloody death has ultimately made him a more contemplative and faithful person. Realistic overview of an often misunderstood fighting force.” —Kirkus Reviews

Howard E. Wasdin joined the navy to get money for college as a search-and-rescue swimmer but reenlisted to become a navy SEAL. He graduated with Basic Underwater Demolition/SEAL (BUD/S) Class 143. After the Battle of Mogadishu, he was medically retired in November 1995. He finished his biology degree and later became a doctor of chiropractic. He currently sees patients at his clinic located in Jesup, Georgia.

Stephen Templin was born in Los Angeles and lived in Arizona, Idaho, and North Carolina before joining the US Navy, where he completed Hell Week, qualified as a pistol and rifle expert, and blew things up during BUD/S training (Basic Underwater Demolition/SEAL Training). After the navy, he became a missionary and a student. Then for fourteen years he lectured as a tenured professor at Meio University in Japan, where he trained in the martial art aikido. He won the Silver Screenwriter’s Award at the Houston International Film Festival, has appeared on many bestseller lists, and has been translated into thirteen languages. He earned a doctorate in education and teaches university courses on English, education, TESOL, applied linguistics, and intercultural communication. He lives in Dallas–Fort Worth.