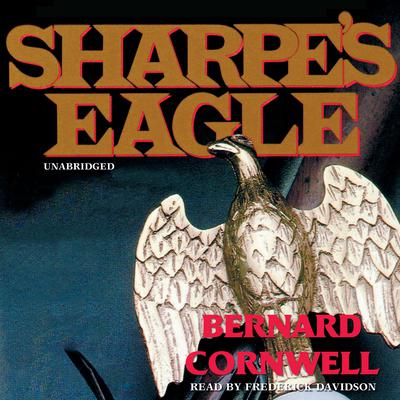 Here is one of those rare novels that completely transports the reader to an unforgettable time and place in history.

At Talavera in July of 1809, Captain Richard Sharpe, bold, professional, and ruthless, prepares to lead his men against the armies of Napoleon in what will be the bloodiest battle of the war. Sharpe has earned his captaincy, but there are others, such as the foppish Lieutenant Gibbons and his uncle, Colonel Henry Simmerson, who have bought their commissions despite their incompetence. After their cowardly loss of the regiment’s colors, their resentment toward the upstart Sharpe turns to treachery, and Sharpe must battle his way through sword fights and bloody warfare to redeem the honor of his regiment. His goal is to capture the most valued prize in the French Army—a golden Imperial Eagle, the standard touched by the hand of Napoleon himself.

“[Sharpe is] a hero in the mold of James Bond.” —Philadelphia Inquirer
“A masterful blend of fiction and historical detail.” —Newsday
“A totally convincing picture of warfare, of hand-to-hand, sword-to-sword, bayonet-to-bayonet fighting.” —Cleveland Plain Dealer
“A combination of skilled storyteller and skilled reader make this audio a real winner.” —Kliatt