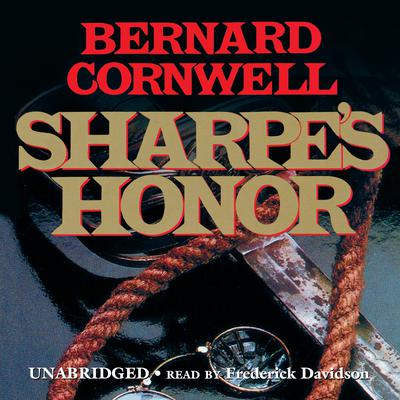 It is a perfect plot for Napoleon: stop Wellington’s forces in Spain and destroy Major Richard Sharpe.

Major Richard Sharpe awaits the opening shots of the army’s new campaign with grim expectancy. Victory depends on the increasingly fragile alliance between Britain and Spain—an alliance that must be maintained at any cost. Unfortunately, things are about to get complicated for the Sharpe.

An unfinished duel, a midnight murder, and the treachery of a beautiful prostitute lead to the imprisonment of Sharpe. The pawn in a plot conceived by his archenemy, Pierre Ducos, Sharpe is condemned to die as an assassin. Caught in a web of political intrigue for which his military experience has left him fatally unprepared, Sharpe becomes a fugitive—a man hunted by both ally and enemy alike.

“That every Sharpe novel is better than the last, devotees have long taken for granted, but this masterly narrative is no less worthy of high praise for that.” —Times Literary Supplement (London)
“Cornwell gives the [listener] vivid settings and the sound and smell of eighteenth-century warfare better than anyone else.” —Newport News Daily Express
“Another inventive, active outing for the stalwart…Major Sharpe.” —Kirkus Reviews