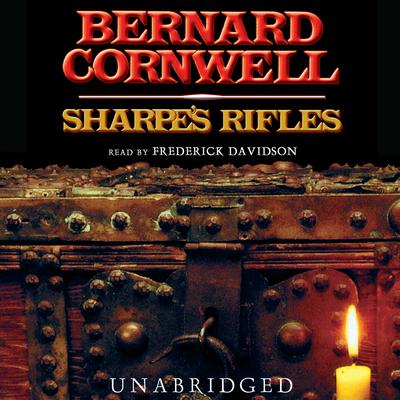 When Sharpe rises from the ranks to take command, he finds himself with an unexpected ally in the war against Napoleon.

It’s 1809, and the powerful French juggernaut is sweeping across Spain. Lieutenant Richard Sharpe is newly in command of the demoralized, distrustful men of the Ninety-fifth Rifles. He must lead them to safety, and the only means of escape is a treacherous trek through the enemy-infested mountains of Spain.

Blas Vivar and his band of intrepid Spanish soldiers may prove to be their salvation. But Vivar is transporting a mysterious chest that he claims can shift the tides of war, and the French are determined to get it—no matter what the cost.

“Sharpe may come to personify the British Army during the Napoleonic Wars in the same way that Horatio Hornblower does the Royal Navy…A crackling adventure yarn, sure to delight Sharpe's many fans.” —Library Journal
“Consistently exciting…These are wonderful novels.” —Stephen King
“Due to Frederick Davidson’s fine performance, this recording should rival the television miniseries in popularity.” —Library Journal (audio review)
“A hero in the mold of James Bond.”  —Philadelphia Inquirer