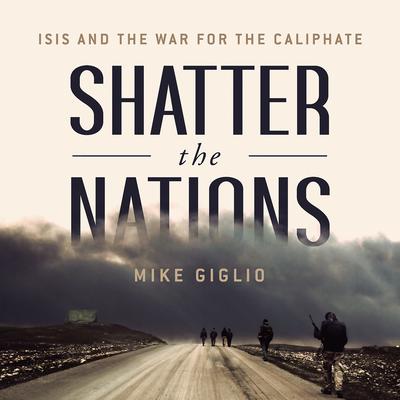 Shatter the Nations: ISIS and the War for the Caliphate

Unflinching dispatches of an embedded war reporter covering ISIS and the unlikely alliance of forces who came together to defeat it.

The battle to defeat ISIS was an unremittingly brutal and dystopian struggle, a multi-sided war of gritty local commandos and militias. Mike Giglio takes readers to the heart of this shifting, uncertain conflict, capturing the essence of a modern war.

At its peak, ISIS controlled a self-styled "caliphate" the size of Great Britain, with a population cast into servitude that numbered in the millions. Its territory spread across Iraq and Syria as its influence stretched throughout the wider world.

Giglio tells the story of the rise of the caliphate and the ramshackle coalition--aided by secretive Western troops and American airstrikes--that was assembled to break it down village by village, district by district. The story moves from the smugglers, traffickers, and jihadis working on the ISIS side to the victims of its zealous persecution and the local soldiers who died by the thousands to defeat it. Amid the battlefield drama, culminating in a climactic showdown in Mosul, is a dazzlingly human portrait of the destructive power of extremism, and of the tenacity and astonishing courage required to defeat it.

An epic war story: bravely reported, brilliantly written, shot through with humanity. —Tim Weiner, National Book Award-winning author of Legacy of Ashes
Shatter the Nations is a reporter's account of today's Middle East wars that reads like a screenplay. Somehow Mike Giglio avoids clichés while bringing to life the suicide bombers, resistance heroes, militants, and civilians and making sense out of those murky and hideous wars. —Elizabeth Becker, author of When the War Was Over
"Mike Giglio has done some great investigative reporting in the Middle East, but he's also the intrepid newsman ready to go to the worst place in the world. His account of the battle for Mosul, where ISIS threw everything it had at Iraqi special forces, including mortars, drone-fired grenades and suicide bomb vehicles, is hair-raising and unforgettable. —Roy Gutman, Pulitzer Prize-winning reporter
A compelling and deeply reported narrative that explains how ISIS will have a lasting effect not just on the region but on the wider world. This is a distinguished, firsthand account that covers all sides of the conflict with the terror group--which is rare. —Hassan Hassan, author of the New York Times-bestselling ISIS: Inside the Army of Terror
Giglio's Shatter the Nations is more than a brave on-the-ground chronicle of the battle against ISIS-it is a lyrical, thrilling work that stands amongst the best of war literature. —Molly Crabapple, author of Drawing Blood and illustrator of Brothers of the Gun: A Memoir of the Syrian War
An excellent and invaluable summation of the complex conflict in the Middle East from 2011-2017, shedding light on the murky circumstances behind so many political soundbites that inadequately cover terrorism and plight of refugees. —Booklist
Giglio's probing, prescient narrative illuminates the global repercussions of a murky conflict. —Publishers Weekly
With a reporter's unflinching eye and in a fine writer's clear prose, Mike Giglio has written a hypnotically compelling account of the rise and fall of the blood-drenched ISIS 'caliphate' in the Middle East. Unforgettable. —Jon Lee Anderson, staff writer for the New Yorker
[A] forthright account by an invested journalist unafraid to ask key questions about the many ramifications of the conflict —Kirkus Reviews

Mike Giglio is a world correspondent for BuzzFeed News and is based in Washington, D.C. He appears regularly on the BBC, CNN, NPR and other news outlets, and briefs U.S. lawmakers on his reporting from the field. He was previously the Middle East correspondent for Newsweek and The Daily Beast. His articles on ISIS’s oil-smuggling ring and ISIS defectors are some of the best-performing features on BuzzFeed, garnering as many as 500,000 views in a few days. He is a graduate of Davidson College and a native of New York. He is currently based out of Washington, D.C.