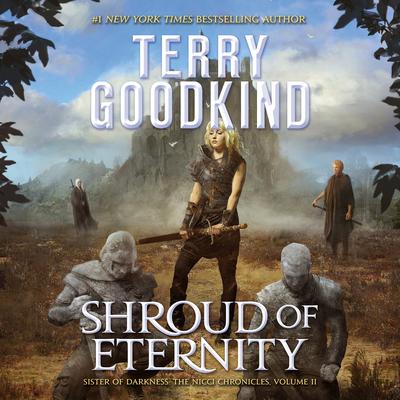 Shroud of Eternity: Sister of Darkness

The Sister of Darkness: The Nicci Chronicles: Book 2

The formidable sorceress Nicci and her companions—the newly powerless Nathan and the youthful Bannon—set out on another quest after driving ruthless Norukai slavers out of Renda Bay. Their mission: restore Nathan’s magic and, for Nicci, save the world.

Guided by the witch-woman Red’s mysterious prophecy, the trio makes their way south of Kol Adair towards a wondrous city shrouded behind time, Ildakar. But the grotesque omens on their path to Nathan’s salvation—severed Norukai heads on pikes, a genetically modified monster, and a petrified army of half a million—are just a taste of the unimaginable horrors that await within the Shroud of Eternity.

Terry Goodkind is the author of the Sword of Truth series and the #1 New York Times bestsellers The Omen Machine and Phantom.