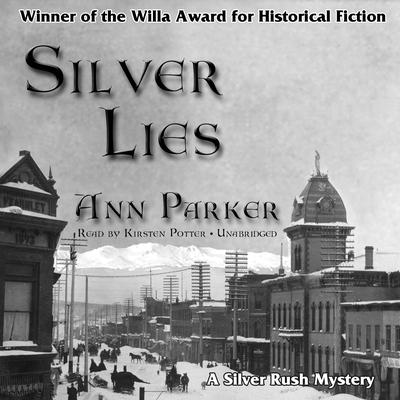 Winner of the 2004WILLA Literary Award for Historical Fiction

The crooked, the greedy, and those with a checkered past—they all came to Leadville with the same purpose: Get in, get rich, get out.

As 1879 draws to a close, silver fever burns hot in the Rocky Mountain boomtown of Leadville, Colorado. Unfortunately for Joe Rose, an assayer of precious metals, death stakes its own claim. Joe’s body is found trampled into the muck behind Inez Stannert’s saloon.

Inez already has much more to deal with than pouring shots of Taos Lightning. A lady educated on the East Coast, she has a past that doesn’t bear close scrutiny, due in part to her elopement with a gambling man who has recently disappeared. Most of the townsfolk, including Inez’s business partner, Abe Jackson, dismiss Joe’s death as an accident. Death, after all, is no stranger in Leadville. But Inez wonders why this loving husband and father was carrying a brass token good for “one free screw” at the parlor house of Denver madam Mattie Silks.

When Joe’s widow Emma asks Inez to settle Joe’s affairs, Inez reluctantly agrees and soon uncovers skewed assays, bogus greenbacks, and blackmail, leading her to believe that Joe was murdered. Was he killed over money or for purely personal motives? It’s up to Inez to find out.

“Combines a kind of gritty grandeur with a knowing wisdom about the way the present shapes our perceptions of the past.” —Chicago Tribune
“Meet Inez Stannert, the poker-playing, straight-talking, gun-toting owner of the Silver Queen Saloon and the heroine of Parker’s excellent debut…Drawing on historic facts and figures of 1870s Colorado, Parker tells a gripping tale of love, greed, and murder in the Old West, with a cast of convincing, larger-than-life characters, including a brief appearance from Bat Masterson himself. Inez is a woman well ahead of her time and a welcome addition to the genre, as is Parker, who has left enough loose ends to beckon readers to the next Leadville mystery.”  —Publishers Weekly (starred review)
“Kirsten Potter has raised the bar with her breathtaking reading of this historical mystery. Without detracting the least bit from protagonist Inez Stannert, Potter gives equal attention to her portrayals of minor characters. Her depiction of Bridgette, an Irish cook in Stannert’s saloon, is spot-on. Handyman Useless’ bumbling persona is painted expertly…Silver Lies is a triumph for both author and narrator.” —AudioFile
“Silver Lies is a tale of greed, lust, and deception set in Leadville in its heyday, when men—and not a few women—stopped at nothing, not even murder, to strike it rich. Ann Parker gets is just right, and the result is a terrific debut novel.” —Margaret Coel, American historian and mystery writer