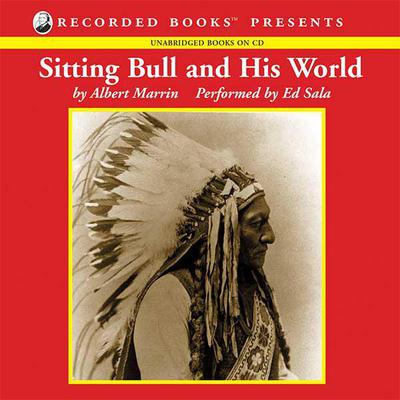 Sitting Bull and His World

Sitting Bull calmly dismounted his horse. Slowly, he walked straight toward a menacing line of entrenched U.S. 7th Cavalry riflemen. A hundred yards away, he sat and defiantly smoked his pipe until it was empty, bullets peppering the ground around him. He then rose and walked back to his people, unharmed. Sitting Bull--the great Lakota chief, warrior, and holy man is commonly remembered for leading his people during the Battle of Little Bighorn. His is a story of both extraordinary achievement and unthinkable hardship. He valiantly defended his way of life, but was shamefully and brutally bullied by America's government. Respected among Indians as no other chief in history, he was inhumanely despised by whites as an evil, violent savage. More than a biography, this book is a history of Plains Indian tribes during Sitting Bull's time. Through meticulous research, Albert Marrin recreates the great chief's world, shattering many myths in the process. Narrator Ed Sala vividly reconstructs the events surrounding this legendary man.

Albert Marrin is the author of numerous nonfiction books for young readers, including Uprooted, a Sibert Honor Book, and the National Book Award finalist Flesh and Blood So Cheap: The Triangle Fire and Its Legacy. His many honors include the Washington Post Childrens’ Book Guild Lifetime Achievement Award, the James Madison Book Award for Lifetime Achievement, and the 2008 National Endowment for the Humanities Medal.