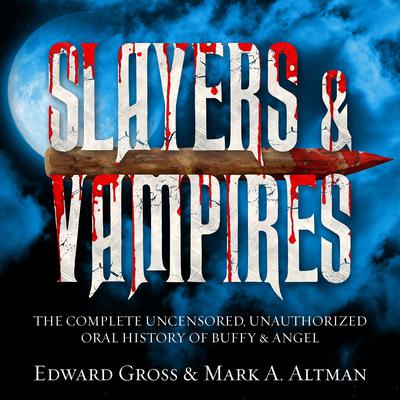 By Edward Gross  and Mark A. Altman
Read by James Patrick Cronin  and Julie McKay

Two decades after its groundbreaking debut, millions of fans worldwide remain enthralled with the incredible exploits of Joss Whedon's Buffy Summers, the slayer and feminist icon who saved the world . . . a lot; as well as Angel, the tortured vampire with a soul who fought against the apocalyptic forces of evil.

Now, go behind-the-scenes of these legendary series that ushered in the new Golden Age of Television, with the candid recollections of writers, creators, executives, programmers, critics, and cast members. Together they unveil the oftentimes shocking true story of how a failed motion picture became an acclaimed cult television series, how that show became a pawn between two networks, and the spin-off series that was as engaging as everything that came before.

This is the amazing true story of Buffy and the friends, vampires, slayers, and demons who changed television forever.

Edward Gross has an extensive career of covering film and television as an editor at numerous publications, including Cinescape, Starlog, and Femme Fatales.

Mark A. Altman is a former journalist and is also the writer/producer of the beloved romantic comedy Free Enterprise as well as the television series Agent X, Castle, and Necessary Roughness.