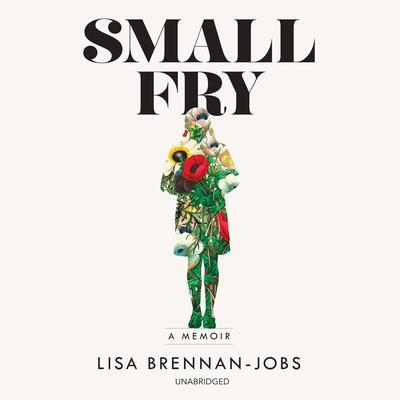 An Audible Editors Top Pick of Women's Stories That Uplift Us

A Literary Hub Pick of the Best Memoirs of the Decade

Finalist for the 2018 Goodreads Choice Awards

A Shondaland Pick of Best Memoirs by Women

A frank, smart, and captivating memoir by the daughter of Apple founder Steve Jobs

Born on a farm and named in a field by her parents―artist Chrisann Brennan and Steve Jobs―Lisa Brennan-Jobs’ childhood unfolded in a rapidly changing Silicon Valley. When she was young, Lisa’s father was a mythical figure who was rarely present in her life. As she grew older, her father took an interest in her, ushering her into a new world of mansions, vacations, and private schools. His attention was thrilling, but he could also be cold, critical, and unpredictable. When her relationship with her mother grew strained in high school, Lisa decided to move in with her father, hoping he’d become the parent she’d always wanted him to be.

Small Fry is Lisa Brennan-Jobs’ poignant story of a childhood spent between two imperfect but extraordinary homes. Scrappy, wise, and funny, young Lisa is an unforgettable guide through her parents’ fascinating and disparate worlds. Part portrait of a complex family, part love letter to California in the seventies and eighties, Small Fry is an enthralling book by an insightful new literary voice.

“Lisa Brennan-Jobs remembers the pride and pain of a childhood spent navigating the vastness between her struggling single mom and Apple’s mercurial founder.” —Vanity Fair
“An entrancing memoir…will force readers to grapple with whether Jobs was not merely unmenschlike but a monster. It is not a stretch to say that if you read this book, you will never think of Jobs the same way again.” —New York Times
“This artfully constructed, self-critical memoir feels like so much more than axe-grinding: what does look good is Brennan-Jobs’s future as a writer.” —Amazon.com
“He loved her, he loved her not. People are going to flock to this memoir for its shocking revelations about Steve Jobs—who was the author’s father—and they aren’t going to be disappointed…Lisa Brennan-Jobs brings devastating insight to the task of telling her story.” —Audible.com
“Brennan-Jobs’s narrative is tinged with awe, yearning, and disappointment…This sincere and disquieting portrait reveals a complex father-daughter relationship.” —Publishers Weekly (starred review)
“Brennan-Jobs skillfully relays her past without judgment, staying true to her younger self. It is a testament to her fine writing and journalistic approach that her memoir never turns maudlin or gossipy. Rather than a celebrity biography, this is Brennan-Jobs’ authentic story of growing up in two very different environments, neither of which felt quite like home.” —Booklist (starred review)
“It’s rare to find a memoir from a celebrity’s child in which the writing is equal to—or exceeds—the parent’s reputation, but that is the case with Brennan-Jobs’ debut. The author engagingly packs in every detail of her life…The book also includes enough celebrity gossip to please tabloid lovers, but this is not a tell-all; it’s an exquisitely rendered story of family, love, and identity.” —Kirkus Reviews (starred review)
“A singular life and California in the seventies and eighties.” —Library Journal
“Compassionate, wise, and filled with finely-wrought detail, Small Fry is a wonder of a book, and Lisa Brennan-Jobs is a wonder of a writer.” —Jamie Quatro, author of Fire Sermon
“As clear-eyed, amusing, honest, unsentimental, and sad as any memoir I’ve read in years…No other book or film has captured Steve Jobs as distinctly as this one has.” —Phillip Lopate, author of To Show and to Tell

Lisa Brennan-Jobs’ work has appeared in Vogue, the Los Angeles Times, the Southwest Review, the Harvard Advocate, the Massachusetts Review, and O, The Oprah Magazine. She has a BA in English literature from Harvard University and an MFA in creative writing from Bennington College.