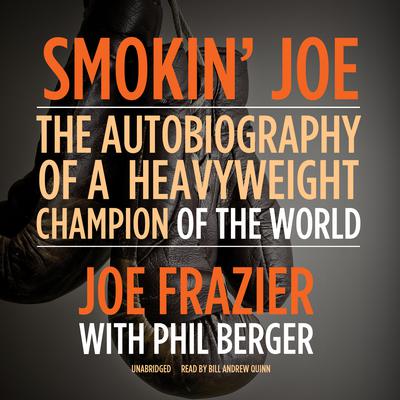 Smokin’ Joe: The Autobiography of a Heavyweight Champion of the World, Smokin’ Joe Frazier

When boxing was bold, bright, and glamorous and the fights were the hottest sporting events of the year, Joe Frazier was king as the Heavyweight Champion of the World. From 1970 to 1973 he reigned. With a career record of 32-4-1 with twenty-seven knockouts and an Olympic gold medal, Frazier leaves little question that he was one of the greatest fighters of all time.

Well-known, loved, and revered as a gentleman and a fierce competitor in the ring, Joe Frazier speaks his mind in Smokin' Joe—about growing up poor and fighting in the first $2.5 million bout; about the early days of his friendship with Muhammad Ali and how their relationship changed; and about the often corrupt world of boxing and what really went on inside and outside the ring.

Personable, good-natured, and funny, Frazier's story is a real delight.

Joe Frazier (1944–2011), also known as “Smokin’ Joe,” was a professional boxer. During his twenty-one year career, he earned an Olympic gold medal in 1964 and was named World Heavyweight Champion in 1970. He only lost to two fighters: Muhammad Ali and George Foreman. An inductee of both the International Boxing Hall of Fame and the World Boxing Hall of Fame, he is considered one of the ten greatest heavyweights of all time.

Phil Berger (1943–2001) was a sportswriter, author, and screenwriter. A former boxing reporter for the New York Times, he wrote more than a dozen books about basketball and boxing, including Forever Showtime: The Checkered Life of Pistol Pete Maravich, Miracle on 33rd Street: The New York Knickerbockers’ Championship Season, and Punch Lines: Berger on Boxing.