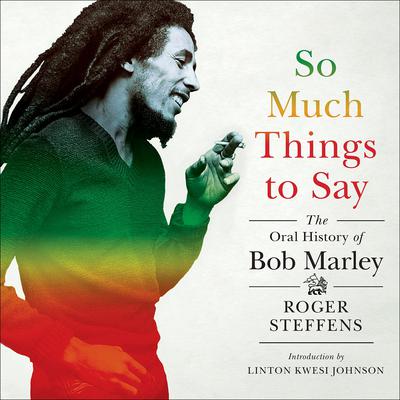 So Much Things to Say: The Oral History of Bob Marley

Bob Marley's life is the stuff of legend. Raised in the slums of Kingston, Jamaica, Marley (1945–1981) wrote songs that inspired millions. So Much Things to Say tells Marley's life story like never before. Roger Steffens traveled with the Wailers, interviewed Peter Tosh and Bunny Wailer extensively, and took iconic Marley photographs. Now, drawing on forty years of intimate interviews with band members, family, lovers, and confidants—many speaking publicly for the first time—Steffens crafts a riveting oral history depicting Marley’s life through vivid scenes: the future reggae star auditioning for Coxsone Dodd in Trench Town, the violent confrontation between the Wailers and producer Lee Perry, the attempted assassination (and conspiracy theories that followed), triumphant live performances around the world, and the artist's tragic death from cancer at the age of thirty-six. Revealing and original, So Much Things to Say presents Marley as both man and musician, seen through the eyes of those who knew him best.