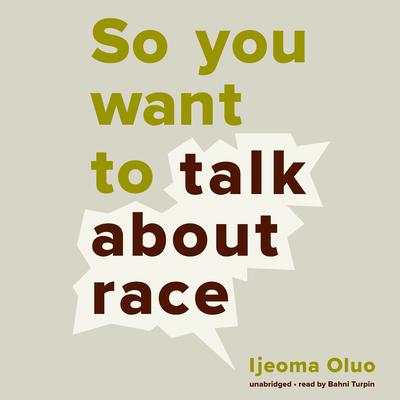 So You Want to Talk about Race

Finalist for the 2019 Washington State Book Award for Nonfiction

Longlisted for the Brooklyn Public Library Literary Prize for Nonfiction

An Audiofile Magazine “Best of the Year” Audiobook

A Paste Magazine Pick of the Best Audiobooks

A January New York Times Pick of New and Noteworthy

A Shelf Awareness Best Books of the Year selection

A Vogue Pick of 7 Books to Change Your Life

A Kirkus Reviews Pick of Books That Challenge Racism

A Bustle Pick of Books about Race

A BookRiot Pick of Nonfiction about Racism

A Goop Pick of Anti-Racism Books

A BuzzFeed Books Pick of Essential Reads about Anti-Racism

A Literary Hub Pick of the Week

A current, constructive, and actionable exploration of today’s racial landscape, offering straightforward clarity that readers of all races need to contribute to the dismantling of the racial divide

In So You Want to Talk about Race, editor-at-large of the Establishment Ijeoma Oluo offers a contemporary, accessible take on the racial landscape in America, addressing head-on such issues as privilege, police brutality, intersectionality, micro-aggressions, the Black Lives Matter movement, and the “N” word. Perfectly positioned to bridge the gap between people of color and white Americans struggling with race complexities, Oluo answers the questions readers don’t dare ask, and explains the concepts that continue to elude everyday Americans.

Oluo is an exceptional writer with a rare ability to be straightforward, funny, and effective in her coverage of sensitive, hyper-charged issues in America. Her messages are passionate but finely tuned, and crystallize ideas that would otherwise be vague by empowering them with aha-moment clarity. Her writing brings to mind voices like Ta-Nehisi Coates and Roxane Gay, and Jessica Valenti in Full Frontal Feminism, and a young Gloria Naylor, particularly in Naylor’s seminal essay “The Meaning of a Word.”

“Oluo takes on the thorniest questions surrounding race, from police brutality to who can use the ‘N’ word.” —New York Times
“Read it, then recommend it to everyone you know.” —Harper’s Bazaar
“Insightful and trenchant but not preachy…A topical book in a time when racial tensions are on the rise.” —Publishers Weekly
“A clear and candid contribution to an essential conversation.” —Kirkus Reviews
“This book is much-needed and timely. It is more than a primer on racism. It is a comprehensive conversation guide.” —Literary Hub
“It’s the most direct and disarming approach to the topic that I’ve ever read.” — Leslie Berland, CMO of Twitter
“In a clear, direct, matter-of-fact tone, Oluo mixes memoir with guidance, walking the reader through some of the most complicated, and in many cases, deadly conversations the country is having (or not having) today. I have gone back to it again and again..It should be on everyone’s bookshelf.” —Glynnis MacNicol, Contently Award-winning author of No One Tells You This
“You are not going to find a more user-friendly examination of race in America than Ijeoma Oluo’s fantastic new book. The writing is elegantly simple, which is a real feat when tackling such a thorny issue. Think of it as Race for the Willing-to-Listen.” —Andy Richter, writer and actor
“Oluo has created a brilliant and thought-provoking work. Seamlessly connecting deeply moving personal stories with practical solutions, readers will leave with inspiration and tools to help create personal and societal transformations. A necessary read for any white person seriously committed to better understanding race in the United States.” —Matt McGorry, actor
“While so many people want to become ‘thought leaders,’ ‘bloggers,’ or even just ‘influential,’ Oluo is eons past that.” —Forbes
“A unique attempt to bridge the gap between Americans who talk and think regularly about race in America and those who don’t—most typically, white people…Impassioned and unflinching.” —Vogue
“Narrator Bahni Turpin’s impassioned voice clearly conveys the gravity of this book on race and racism…Turpin walks listeners through each chapter, allowing them time to absorb the impact of topics from Affirmative Action to police brutality…[and] Turpin engagingly reads real-life examples Oluo uses to illustrate complex concepts such as intersectionality and white privilege…Winner of the AudioFile Earphones Award.” —AudioFile
“Important and relevant. Police brutality, micro-aggressions at the workplace, and affirmative action are all grist for the verbal mill. Narrator Turpin has a soothing voice and reads with authority, understanding, and passion…Both narrator and author are worth seeking out again.” —Los Angeles Times (audio review)
“Delivers a punch while describing the realities of blackness in America.” —Bust magazine
“With urgency, grace, and a straightforward sensibility, Oluo talks about race, exploring intersectionality, privilege, cultural appropriation, microaggression, and a great deal more…Highly recommended.” —Library Journal (starred review)
“A well-organized, well-argued, and lively collection of essays…Oluo is persuasive, sympathetic and funny. She is also direct…This is a challenging, sympathetic, and beautifully organized how-to manual.” —Shelf Awareness (starred review)
“Precise, poignant, and edifying, this primer gives readers much-needed tools…and offering concrete ways to confront racism…[while] blending personal accounts and meticulously cited research…This is essential reading.” —School Library Journal (starred review)

Ijeoma Oluo is the author of the New York Times bestseller So You Want to Talk about Race. Her work on race has been featured in the New York Times and the Washington Post. She has twice been named to the Root 100, and she received the 2018 Feminist Humanist Award from the American Humanist Association.