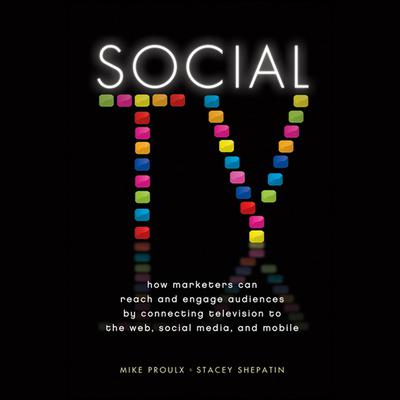 Social TV: How Marketers Can Reach and Engage Audiences by Connecting Television to the Web, Social Media, and Mobile

By Mike Proulx  and Stacey Shepatin
Read by William Dufris

TV consumption is on the rise, but consumers are viewing and experiencing TV in a vastly different way than they were even 5 years ago.  TV viewership has radically transformed from a passive experience to a more engaged, interactive, and on-demand experience. Content producers will not only have to continue to create quality entertainment products, but they will now need to consider ways to a) enhance the viewing experience, b) leverage social media to promote their properties, and c) distribute their content across multiple platforms. Trends in TV Consumption:   Digital recording devices have allowed for consumers to time shift. At the end of 2010, 38% percent of all U.S. TV households had a DVR; however, those viewers are still watching commercials. Nielsen also found that in DVR homes, playback actually improves commercial ratings by 44% among 18-49s after three days. People are watching full-length videos on computers. In Jan. 2011 143.9 million Americans viewed videos online (Source:Nielsen). Furthermore, eMarketer reports that a full third of U.S. adult Internet users watch full-length TV shows online. Third-screen viewing via mobile devices is on the rise. Consumers are viewing more of their favorite shows from mobile devices, such as phones and tablets a habit that has increased 41% year-over-year. The majority users of mobile video are teens, clocking in more than seven hours a month on average. Multi-screen viewing is also on the rise. Per a recent Nielsen study,70 percent of tablet owners and 68 percent of smartphone owners said they use their devices while watching television.  In another study from late 2010, 86% of mobile Internet users said they were using their devices while watching TV (Source: Nielsen/Yahoo). What are people doing while interacting with these devices during TV shows? Nielsen/Yahoo found that a third were using mobile apps, 37% were browsing the web, 40% were engaging via social networks and 56% were texting with a friend or family member. Examples of how companies are responding: Old Navy partnered with music tagging app Shazam to make their commercials more interactive.  Consumers who tag the commercial as it airs are driven to a custom experience where they can download music, learn more about the clothes, get coupons, and more. Wheat Thins thrust unexpected Twitter users (who happened to tweet about their product) into the starring role of their TV commercials. Their ad shows a Wheat Thins team delivering a truckload of crackers to this unsuspecting fan who mentioned they ran out of their product in a tweet USA Network recently launched Chatter app, which lets viewers talk to other fans and engage with content from several social channels while viewing the show.