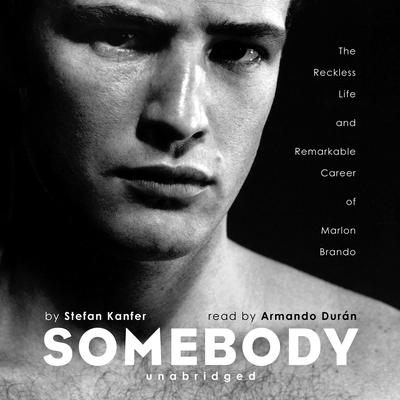 Somebody: The Reckless Life and Remarkable Career of Marlon Brando

Actor Marlon Brando is perpetually fascinating, both for the power of the characters he portrayed and for his tumultuous personal life. Bestselling biographer Stefan Kanfer seamlessly intertwines the man and his work to give us this illuminating appraisal.

Kanfer takes us from Brando’s troubled childhood to his arrival in New York in the 1940s, where he studied with the legendary Stella Adler and became, at age twenty-three, the star of Broadway in A Streetcar Named Desire. He offers a detailed analysis of each of Brando’s films, showing the evolution of Brando’s singular genius, and brings into focus his ambivalence toward his craft as well as the tragedies that shadowed his last years. What emerges is a definitive life of an iconic artist whose work forever altered the landscape of show business.

“Most everything you ever wanted to know about Marlon Brando and his impact on acting and America from a journalist who covers all the bases…It’s all ventilated, successes and excesses, on these twelve discs delivered with appropriate resonance and assurity by narrator Armando Durán. Bottom line: An all-inclusive biography of one of the twentieth century’s most intriguing and pivotal actors.” —Huffington Post
“Armando Durán admirably performs the heavy labor of narrating the prose and occasionally quoting and inflecting the tone of one of cinema’s most quoted leading men. Overall, Durán succeeds in orally evoking images of Marlon Brando…his deliberate and articulate delivery maintains good rhythm and emphasis in executing Kanfer’s solid and compelling biography…The accessible and enjoyable prose of Kanfer and the deep, steady voice Durán will strike any listener as compelling.” —AudioFile
“Durán tackles this memoir of Brando with gusto and panache. With his resonant tones and easy, conversational manner, Durán proves himself most worthy to recount Brando’s storied—and often tragic—life…Durán’s seamless reading helps forge a personal bond with listeners. Author Kanfer serves up a compelling account of the celebrated star, and Durán’s animated rendering makes the most of every moment, keeping us tuned in and engaged.” —Booklist
“Swift, witty prose keeps the narrative moving through a chronicle of every production with which Brando was involved. Kanfer skillfully weaves in Broadway and Hollywood history, and his behind-the-scenes analysis of Brando’s films will send you running to rent the classics, the reluctantly acknowledged cult favorites and even the bombs. An inspiring, depressing, riveting story.” —Kirkus Reviews

Stefan Kanfer, a writer and editor at Time magazine for more than twenty years, is the author of the bestselling biographies Groucho and Ball of Fire: The Tumultuous Life and Comic Art of Lucille Ball. He has also written Stardust Lost, The Eighth Sin, A Summer World, The Last Empire, and Serious Business. Named a Literary Lion of the New York Public Library and recipient of numerous writing awards, he is currently a contributing editor for City Journal.