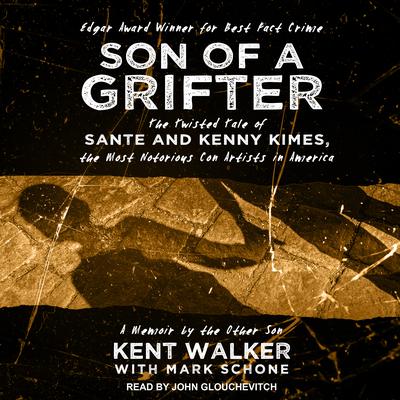 Son of a Grifter: The Twisted Tale of Sante and Kenny Kimes, the Most Notorious Con Artists in America: A Memoir by the Other Son

By Mark Schone  and Kent Walker
Read by John Glouchevitch

In 1988 a troubled young man and his flamboyant mother were arrested for murdering a wealthy widow in her New York City mansion. Suddenly, America was transfixed by a pair of real-life film noir characters. The media couldn't get enough of the twisted relationship between Sante Kimes and her twenty-three-year-old son Kenny.

But the most chilling story of all was never told—until now. Kent Walker, Sante's elder son, reveals how he survived forty years of "the Dragon Lady's" very special brand of motherly love and still managed to get away.

As a child Kent watched his mother destroy his hardworking father, Ed Walker, and then—with Kent's painful collusion—snare what Sante called "my millionaire." When she married seemingly respectable real-estate developer Ken Kimes, it was a match made in hell.

Well researched and touching . . . As a chronicle of Sante Kimes's life, it's unlikely to be surpassed by any other. —Publishers Weekly

Mark Schone is an editor with nbcnews.com and the investigative unit at NBC News. His work has appeared in Rolling Stone, Wired, the New York Times, Outside, and many other publications, and has also been featured on the radio program This American Life and in the books Best American Crime Writing and The Encyclopedia of Country Music.

Kent Walker has appeared on many television and radio talk shows, including Larry King Live, The View, Fresh Air, Dateline, and The Today Show. He lives in Southern California with his wife and children.