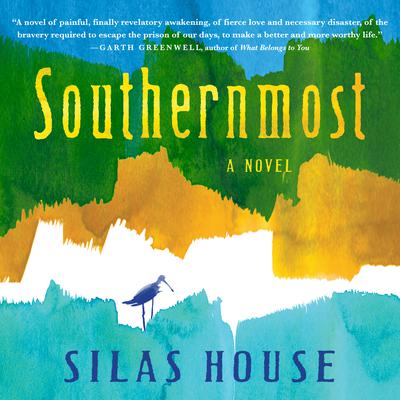 In this stunning novel about judgment, courage, heartbreak, and change, author Silas House wrestles with the limits of belief and the infinite ways to love.

In the aftermath of a flood that washes away much of a small Tennessee town, evangelical preacher Asher Sharp offers shelter to two gay men. In doing so, he starts to see his life anew—and risks losing everything: his wife, locked into her religious prejudices; his congregation, which shuns Asher after he delivers a passionate sermon in defense of tolerance; and his young son, Justin, caught in the middle of what turns into a bitter custody battle.

With no way out but ahead, Asher takes Justin and flees to Key West, where he hopes to find his brother, Luke, whom he'd turned against years ago after Luke came out. And it is there, at the southernmost point of the country, that Asher and Justin discover a new way of thinking about the world, and a new way of understanding love.

Southernmost is a tender and affecting book, a meditation on love and its consequences.

“Narrator Charlie Thurston deftly navigates this road story of a father and son on the run…Thurston’s performance evokes both empathy and anger in the listener. He uses a soft Southern accent as Asher escapes to the Florida Keys. The novel begins a bit slowly but, as performed by Thurston, is in the end shocking and emotionally satisfying. Thurston’s evocative performance leaves the listener filled with a potent combination of hope, joy, and sadness. Winner of the AudioFile Earphones Award.” —AudioFile
“A master storyteller, Silas House shows a keen understanding of the modern South wrestling with change.” —Minneapolis Star-Tribune
"[A]n urgent and beautifully written literary thriller about a man on the run that explores themes like the pain of atonement and the necessity of reconciliation, being published at a time when understanding across cultural and political divides seems wider than ever.” —Salon
“A journey of self-discovery, Southernmost dives into the familiar, troubled waters of toxic religion and masculinity to rescue a story of love between men—fathers, sons, brothers, and lovers…It’s an unflinching yet generous portrait of rural America that’s honest, refreshing, and complex.” —Foreword Reviews (starred review)

Silas House is the author of several novels, including A Parchment of Leaves. He is a winner of the E. B. White Award, the Nautilus Award, the Appalachian Book of the Year, the Hobson Medal for Literature, and other honors. He is a frequent contributor to the New York Times and a former commentator for NPR’s “All Things Considered.” He is a member of the Fellowship of Southern Writers.