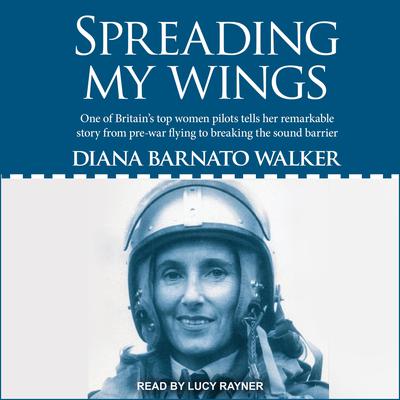 Spreading My Wings: One of Britain's Top Women Pilots Tells Her Remarkable Story from Pre-war Flying to Breaking the Sound Barrier

The remarkable autobiography of a pioneering female aviator who left a privileged life to serve in World War II.

Her father was a millionaire race-car driver who became chairman of Bentley Motors, and her grandfather cofounded the De Beers mining company. But by the late 1930s, debutante Diana Barnato had enough of her affluent, chaperoned existence and sought excitement in flying—soloing at Brooklands after only six hours' training.

Joining the Air Transport Auxiliary in 1941 to help ferry aircraft to squadrons and bases throughout the country, she flew scores of different aircraft—fighters, bombers, and trainers—in all kinds of conditions, and without a radio. By 1945, Barnato had lost many friends, a fiancé, and a husband—but she continued to fly.

In 1962 she was awarded the Jean Lennox Bird Trophy for notable achievement in aviation, but her greatest moment was yet to come, when in 1963 she flew a Lightning through the sound barrier, becoming "the fastest woman in the world." Spreading My Wings is her remarkable memoir, brimming with history and adventure.

Diana Barnato Walker specializes in Aviation. In 1963 she flew a Lightning through the sound barrier, becoming “the fastest woman in the world.”