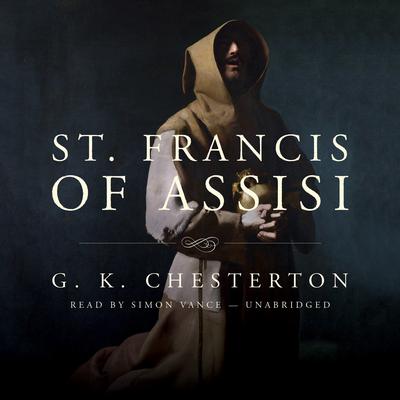 Saint Francis of Assisi is one of the most influential men in the whole of human history. This acclaimed biography of Saint Francis examines the life of a pure artist, a man "whose whole life was a poem." Here is the Saint Francis who prayed and danced with pagan abandon, who talked to animals, and who invented the cr├¿che. Yet Francis also acknowledged the mystic responsibility to communicate his divine experience. Chesterton examines the existence of the pure eccentric and the devout mystic in one man, offering an understanding of Saint Francis in both body and soul.

It has been said that G. K. Chesterton converted to Catholicism in 1922 because "only the Roman Church could have produced a Saint Francis of Assisi." This biography, published shortly after Chesterton's conversion, is universally considered the best appreciation of Francis' life, one that gets to the heart of the matter.

“[Chesterton’s] opinions shine from every page. The reader is rewarded with many fresh perspectives on Francis.” —Franciscan
“In reading G. K. Chesterton on Francis, you get two glories for one: first is an enlightening study of this most beloved of Christian saints, and second is Chesterton himself, one of the great Christian writers of the twentieth century.” —Amazon.com