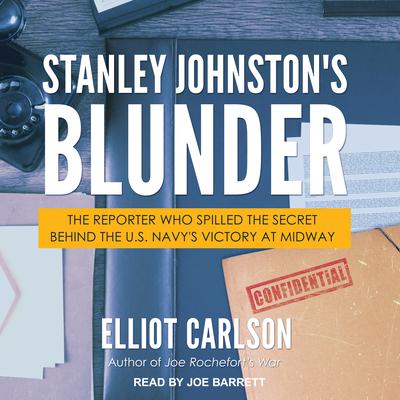 Stanley Johnston's Blunder: The Reporter Who Spilled the Secret Behind the U.S. Navy's Victory at Midway

In 1942 Stanley Johnston is embarked in the aircraft carrier USS Lexington during the Battle of the Coral Sea. In addition to recording the crew's doomed effort to save the ship, Johnston displays great heroism, earning the praise of the Lexington's senior officers. They even recommend him for a medal. Then his story darkens. On board the rescue ship Barnett, Johnston is assigned to a cabin where messages from the Pacific Fleet commander, Admiral Chester Nimitz, are routinely, and carelessly, circulated. One reveals the order of battle of Imperial Japanese Navy forces advancing on Midway Atoll.

Carlson captures the outrage among U.S. Navy brass when they read the 7 June 1942 Chicago Tribune front-page headline, "NAVY HAD WORD OF JAP PLAN TO STRIKE AT SEA." Admirals note that the information in the Tribune article parallels almost precisely the highly secret material in Nimitz's dispatch. They fear Japanese commanders will discover the article, grasp that their code has been cracked, and quickly change it, thereby depriving the U.S. Navy of a priceless military asset.

Elliot Carlson is a longtime journalist who has worked as a reporter, editor and staff writer for such newspapers and magazines as the Honolulu Advertiser, the Wall Street Journal, and Newsweek. Carlson is a graduate of the University of Oregon and Stanford University.