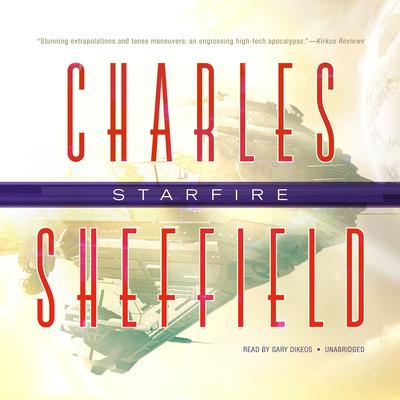 Earth has been ravaged by galactic disaster—but the real devastation is yet to come.

The end draws nigh …

The year is 2053, and Earth has barely recovered from the Alpha Centauri supernova that destroyed much of the planet's infrastructure. Now the supernova's residual effect—a storm of high-energy particles—is racing toward it, and an international effort has been launched out of the Sky City space colony to save the planet. But the controversial plan to build a giant protective shield is falling dangerously behind schedule. A series of unexplained murders has disrupted the Sky City workforce, so much so that a brilliant but monstrous criminal has been enlisted to track down the Sky City killer.

Then more startling news arises. Evidence indicates that the supernova was deliberately engineered and that the lethal particle storm will arrive sooner than anyone expected. But who—or what—tried to destroy the earth? And will the answer come in time to save it from its final apocalypse?

Charles Sheffield (1935–2002) was a mathematician, physicist, and author of both nonfiction and science fiction. For his novel Brother to Dragons, he won the 1992 John W. Campbell Memorial Award for Best Science Fiction Novel. He won the Nebula Award in 1993 and the Hugo Award in 1994 for his novelette Georgia on My Mind. He was a president of the Science Fiction and Fantasy Writers of America and of the American Astronautical Society. He served as chief scientist of Earth Satellite Corporation, a company that processed remote sensing satellite data. He was a distinguished lecturer of the American Institute of Aeronautics and Astronautics and a board member of the National Space Society. Born and educated in England, he held bachelor’s and master’s degrees in mathematics and a doctorate in theoretical physics.