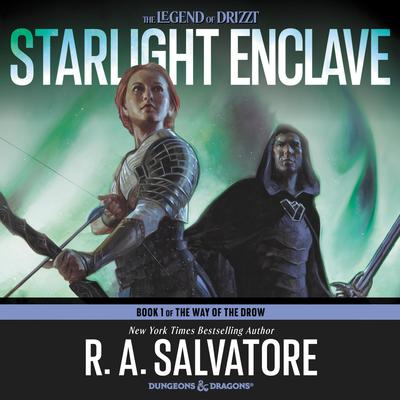 By R. A. Salvatore
Read by Victor Bevine

The Way of the Drow Series: Book 1

From New York Times bestselling author R. A. Salvatore comes a new trilogy and adventure of Drizzt and fantasy’s beloved characters from Dungeons & Dragons’ Forgotten Realms. After the settling dust of the demon uprising and two years of peace, rumblings from the Menzoberranzan drow have Jarlaxle nervous. Worried his allies may be pulled into a Civil War between the great Houses, he is eager to ensure Zaknafein is armed with weapons befitting his skill, including one in particular: Khazid’hea. A powerful artifact, the sword known as “Cutter” has started wars, corrupted its users, and spilled the blood of many, many people. Nonetheless—or maybe because of that—the rogue Jarlaxle and a small group of friends will go on an expedition looking for the weapon’s last wielder, Doum’wielle, in the freezing north, for she may be the key to unlocking the sword’s potential…and perhaps the key to preventing the bloodshed looming over the Underdark.

And as they explore the top of the world, Drizzt is on a journey of his own—both spiritual and physical. He wants to introduce his daughter Brie to Grandmaster Kane and the practices that have been so central to his beliefs. But, having only recently come back from true transcendence, the drow ranger is no longer sure what his beliefs mean anymore. He is on a path to determining the future, not just for his family, but perhaps the entire northlands of the Realms themselves.

And no matter the outcome of either journey, the Realms will never be the same again.

“Salvatore…makes this an accessible entry point for first-timers, and the superior characterizations that marked Salvatore’s prior books are again in evidence.” —Publishers Weekly

R. A. Salvatore is the bestselling author of science fiction, fantasy, and young adult fantasy in stand-alone novels and more than a dozen series of novels. He created the character of Drizzt Do’Urden, the dark elf who has withstood the test of time to stand today as an icon in the fantasy genre. He is also the acclaimed author of the New York Times bestseller Star Wars: The New Jedi Order: Vector Prime.