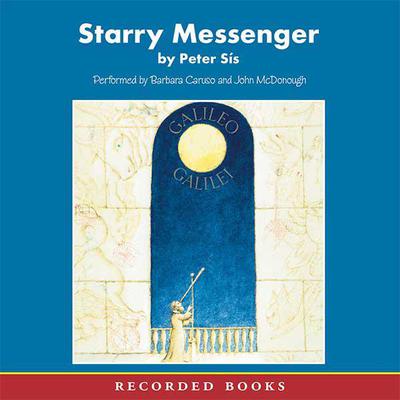 Once upon a time, most everyone thought that the earth was the center of the heavens. God had put the earth in a special place, and the sun and stars moved around it. There were only a few men who thought that the earth and the planets moved around the sun. It was dangerous to think this way, since this idea went against the teachings of the Church. Talking about this idea could be punished by torture or death. But in the 17th century, one brave man, armed with a new invention called the telescope, set out to prove that the sun was indeed the center of the universe. Starry Messenger, which was nominated for the Caldecott Award, provides a clear view of Galileo's far-reaching discoveries, his early fame, and his painful downfall. In language that is easy to understand, Starry Messenger turns ancient history into an accessible, thrilling search for truth that is sure to captivate young readers. The exciting dual narration by Barbara Caruso and John McDonough adds a lively touch.