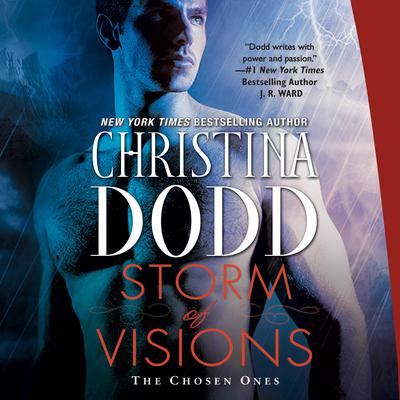 The Chosen Ones Series: Book 1

Master romantic storyteller Christina Dodd delivers Storm of Visions, book 1 in a seductive new paranormal series about an ancient rivalry that lives in the world today ...

When the world was young, twins were born. One brought light to a dark world; the other, darkness and danger. Their powers could not be denied, and they gathered others around them, men and women destined to use their gifts for good or evil. Today, their descendants walk the earth as the Chosen ... and the ultimate battle is about to begin.

Jacqueline Vargha has always run from her gift. Now Caleb D'Angelo forces his way into her life, demands his place as her lover, and insists she take her place as one of the Chosen. She flees, he pursues, but she can no longer deny her visions, or the dangerous man who is her downfall ... and her destiny.

Christina Dodd builds worlds filled with suspense, romance, and adventure and creates some of the most distinctive characters in fiction today. The bestselling author of more than fifty novels, her works have been translated into twenty-five languages, won the Romance Writers of America’s Golden Heart and RITA awards, and been on Library Journal’s Best Books of the Year list.