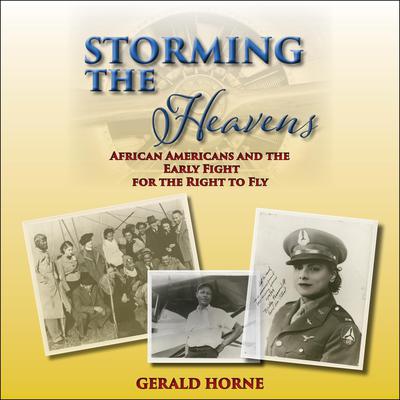 Storming the Heavens: African Americans and the Early Fight for the Right to Fly

The recent Hollywood film Hidden Figures presents a portrait of how African American women shaped the U.S. effort in aerospace during the height of Jim Crow. In Storming the Heavens, Gerald Horne presents the necessary back story to this account and goes further to detail the earlier struggle of African Americans to gain the right to fly. This struggle involved pioneers like Bessie Coleman, who traveled to World War I–era Paris in order to gain piloting skills that she was denied in her U.S. homeland; and John Robinson, from Chicago via Mississippi, who traveled to 1930s Ethiopia, where he was the leading pilot for this beleaguered African nation as it withstood an invasion from fascist Italy, became the personal pilot of His Imperial Majesty, Haile Selassie, and became a founder of Ethiopian Airways. Additionally, Horne adds nuance to the oft told tale of the Tuskegee Airmen and goes further to discuss the role of U.S. pilots during the Korean war in the early 1950s. He also tells the story of how and why U.S. airlines were fought when they began to fly into South Africa—and how planes from this land of apartheid were protested when they landed at U.S. airports.

Gerald Horne holds the John J. and Rebecca Moores Chair of History and African American Studies at the University of Houston. His research has addressed issues of racism in a variety of relations involving labor, politics, civil rights, international relations, and war. He has also written extensively about the film industry. Dr. Horne received his PhD in history from Columbia University; his JD from the University of California, Berkeley; and his BA from Princeton University. Dr. Horne's undergraduate courses include the Civil Rights Movement and U.S. History through Film. He also teaches graduate courses in diplomatic history, labor history, and twentieth-century African American history. Dr. Horne uses a variety of teaching techniques that enrich his classes and motivate students to participate. He is the author of more than thirty books and one hundred scholarly articles and reviews.