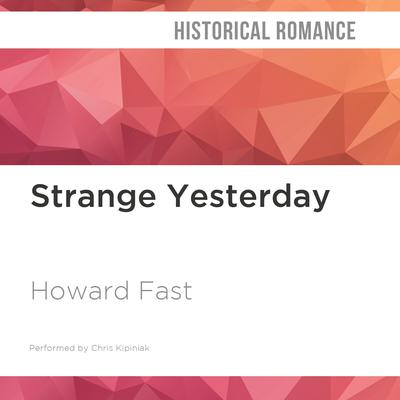 Five generations of Preswicks, living, loving, fighting, laughing, and dying in a surge of limitless power that paralleled the course of America. A full tale of a family that grew with America, of an Aristocracy that gained everything but reason to live. Two women bore John Preswick two children—one the daughter of a southern innkeeper, who nursed a broken Revolutionary soldier back to health, the other a girl in New York, who waited seven years for her lover to return from the war. From these children grew the two branches of the Preswick family, a strange tangle of incestuous love and restless longing, that stretches over one hundred and fifty years, to the World War and the South of today, living in the glory of its past.

All America walks past in Strange Yesterday. Old New York, shaking loose from the British occupation, privateers snapping at Britain’s rule of the sea, preying free as pirates, men losing their bodies and souls in a mad dash for California and gold, men piling up fortunes in fantastic booms and ventures, men off to fight a war in France, returning lost and broken. Here is an original, thrilling tale of the love of a brother for his sister, of men for gold and death. It is a pageant, simply and powerfully told.