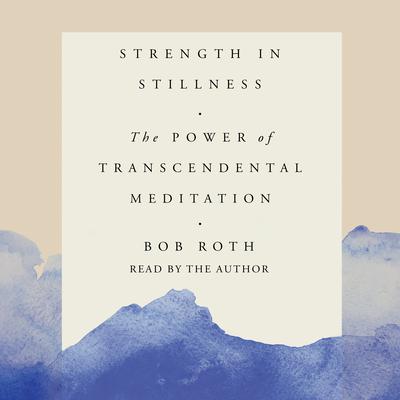 Strength in Stillness: The Power of Transcendental Meditation

A simple, straightforward exploration of Transcendental Meditation and its benefits from world authority Bob Roth.

What do they have in common? The answer is a Transcendental Meditation teacher named Bob Roth, who has spent the past forty-five years helping many thousands of people access their innate creativity and power through this simple, nonreligious technique. Roth’s students range from titans of business and the arts to federal prisoners, from war-scarred veterans to overworked moms and dads.

Medical experts agree that the epidemic of stress is damaging our physical and emotional health at younger and younger ages. While there is no one single cure, the Transcendental Meditation technique is a simple practice that dramatically changes how we respond to stress and life’s challenges. With scientifically proven benefits— reduced stress and anxiety, and improved focus, sleep, resilience, creativity, and memory, to name a few—this five-thousand-year-old technique has a clear and direct impact on our very modern problems.

Once a skeptic, Roth trained under Maharishi Mahesh Yogi, the twentieth century’s foremost scientist of consciousness and meditation, and has since become one of the most experienced and sought-after meditation teachers in the world. In Strength in Stillness, Roth breaks down the science behind Transcendental Meditation in a new, accessible way. He highlights the three distinct types of meditation—Focused Attention, Open Monitoring, and Self-Transcending—and showcases the evidence that the third, Self-Transcending, or Transcendental Meditation, is a uniquely accessible, effective, and efficient way to reduce stress, access inner power, and build resilience.

Free of gimmicks, mystical verbiage, and obscure theory, Strength in Stillness offers a clear explanation for how Transcendental Meditation can calm the mind, body, and spirit.

Bob Roth is one of the most experienced and sought-after meditation teachers in the world. Over the past forty-five years, he has taught transcendental meditation to many thousands of people, including billionaire CEOs, Hollywood celebrities, combat-scarred veterans, and inner-city youth. He serves as the CEO of the David Lynch Foundation and also directs the Center for Leadership Performance. He is the host of the SiriusXM radio show Success without Stress and speaks frequently about the science of meditation to industry leaders at such gatherings as Google Zeitgeist, Aspen Ideas Festival, Wisdom 2.0, and Summit.