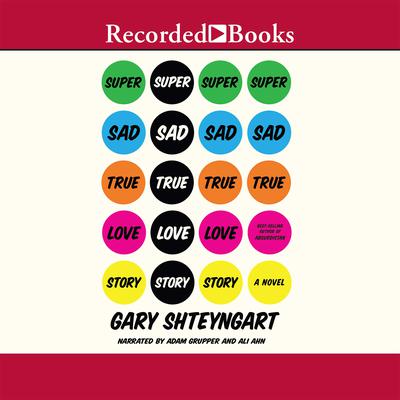 By Gary Shteyngart
Read by Adam Grupper and Ali Ahn

Winner of the 2010 Salon Magazine Best Book Award for Fiction

Gary Shteyngart, author of The Russian Debutante's Handbook, creates a compelling reality in this tale about an illiterate America in the not-too-distant future. Lenny Abramov may just be penning the world's last diary. Which is good, because while falling in love with a rather unpleasant woman and witnessing the fall of a great empire, Lenny has a lot to write about.

“A supersad, superfunny, superaffecting performance…that also uncovers his abilities to write deeply and movingly about love and loss and mortality…In recounting the story of Lenny and Eunice in his antic, supercaffeinated prose, Mr. Shteyngart gives us his most powerful and heartfelt novel yet—a novel that performs the delightful feat of mashing up an apocalyptic satire with a genuine supersad true love story.” —New York Times
“Shteyngart makes trenchant, often hilarious, observations about a fading empire.” —O, The Oprah Magazine
“With Shteyngart’s nutty knack for tangy language, it’s as if Vladimir Nabokov rewrote 1984.” —People
“Funny, on-target, and ultimately sad as it captures the absurdity and anxiety of navigating an increasingly out-of-control world.” —Entertainment Weekly
“A slit-your-wrist satire illuminated by the author’s absurd wit…This zany Russian immigrant loops the comedy of Woody Allen’s Sleeper through the grim insights of George Orwell’s 1984 to produce a Super Sad True Love Story that exposes the moral bankruptcy of our techno-lust.” —Washington Post
“Blending sharp satire with moving portraits of love between lonely people, Gary Shteyngart’s fiendishly clever third novel leaves you wondering whether that dull ache in your stomach is from laughter or just plain sadness…Like flicking between Tolstoy and Facebook on an iPad.” —Observer (London)
“Shteyngart presents another profane and dizzying satire, a dystopic vision of the future as convincing—and, in its way, as frightening—as Cormac McCarthy’s The Road…Shteyngart’s earnestly struggling characters—along with a flurry of running gags—keep the nightmare tour of tomorrow grounded. A rich commentary on the obsessions and catastrophes of the information age and a heartbreaker worthy of its title, this is Shteyngart’s best yet.” —Publishers Weekly (starred review)
“What do you get when you cross Woody Allen with Lolita and 1984? Gary Shteyngart’s new satirical novel, Super Sad True Love Story…Grupper and Ahn’s performances provide listeners with all the wit, humor, and clever writing to be found in this unique novel.” —AudioFile
“Full-tilt and fulminating satirist Shteyngart is mordant, gleeful, and embracive as he funnels today’s follies and atrocities into a devilishly hilarious, soul-shriveling, and all-too plausible vision of a ruthless and crass digital dystopia in which techno-addled humans are still humbled by love and death.” —Booklist (starred review)
“Adam Grupper and Ali Ahn bring these characters to life, perfectly voicing their perspectives. Not so much a sad love story about two people as one of an entire world. Recommended.” —Library Journal
“This cyber-apocalyptic vision of an American future seems eerily like the present, in a bleak comedy that is even more frightening than funny…Chilling. The narrative proceeds in a surprising yet inevitable manner to the outcome the title promises. When Lenny realizes ‘I can’t connect in any meaningful way to anyone,’ he’s writing about not merely a technological breakdown but the human condition, where the line distinguishing comedy from tragedy dissolves.” —Kirkus Reviews (starred review)

Gary Shteyngart is the author of several books, including the New York Times bestselling memoir Little Failure, which was a finalist for the National Book Critics Circle Award, and the novel Super Sad True Love Story, winner of the Bollinger Everyman Wodehouse Prize. His books regularly appear on best-of lists around the world and have been translated into twenty-nine languages.