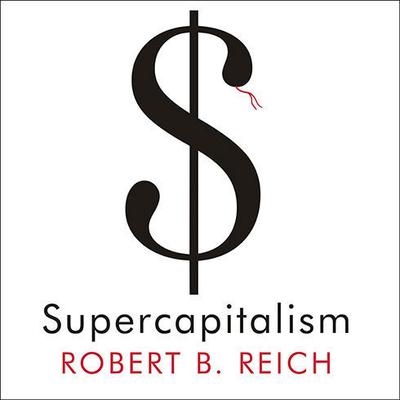 Supercapitalism: The Transformation of Business, Democracy, and Everyday Life

By Robert B. Reich
Read by Dick Hill

Since the 1970s, and notwithstanding three recessions, the U.S. economy has soared. Consumers have been treated to a vast array of new products, while the prices of standard goods and services have declined. Companies have also become far more efficient and the stock market has surged. In short, American capitalism has been a triumph, and it has spread throughout the world. At the same time, argues former secretary of labor Robert B. Reich, the effectiveness of democracy in America has declined. It has grown less responsive to the citizenry, and people are feeling more and more helpless as a result. In Supercapitalism, Reich discusses how capitalism has spilled over into politics, how it threatens democracy, and how citizens both benefit from and lose out because of supercapitalism.

Supercapitalism reminds us that the power of political courage grows when it is joined with clear thinking. —Bill Bradley, author of The New American Story
“A grand debunking of the conventional wisdom…The main thrust of Reich’s argument is right on target…Reich documents in lurid detail the explosive growth of corporate lobbying expenditures and campaign contributions since the 1970s.” —New York Times Book Review
“An engaging and insightful account.” —Harvard Business Review
“Supercapitalism is not a polemic or a call to arms. Reich is merely trying to dent capitalism’s rock-star status while suggesting to a dazed citizenry that, as Shakespeare said of Caesar’s Rome, the fault is not in our stars but in ourselves.” —San Francisco Chronicle