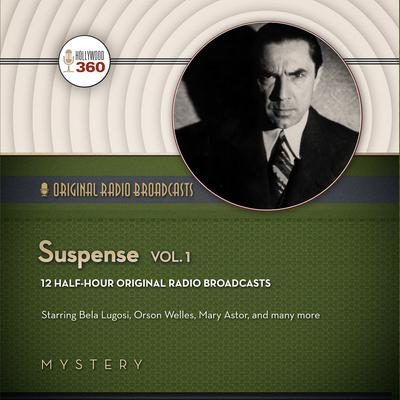 A thrilling collection of episodes from the classic radio show Suspense

Conceived as a potential radio vehicle for Alfred Hitchcock to direct, Suspense was a radio series of epic proportion. It aired on CBS from 1942 to 1962 and is considered by many to be the best mystery drama series of the golden age. Often referred to as "Radio's Outstanding Theater of Thrills," the show focused on suspenseful thrillers starring the biggest names in Hollywood. Early in the run, the episodes were hosted by the "Man in Black" who, from an omniscient perch, narrated stories of people thrown into dangerous or bizarre situations with plots that usually had an unseen twist or two at the very end. Hollywood's finest actors jumped at the chance to appear on Suspense, including Cary Grant, Jimmy Stewart, Alan Ladd, Henry Fonda, Humphrey Bogart, Bette Davis, and Orson Welles. Scripts were by John Dickson Carr, Lucille Fletcher, James Poe, Ray Bradbury, and many others.

“Suspense was a dramatic anthology series, and one of the very best OTR programs, with many episodes still fresh and exciting to listen to today. It was produced by CBS and ran from 1942-1962. It drew upon the talents of many of the leading Hollywood stars of the day, such as Orson Welles, Cary Grant, Peter Lorre and Agnes Moorehead. As the name suggests, Suspense focused mainly on thrillers, but it also offered science-fiction, fantasy and horror tales. Indeed, one of the great strengths of the series was its range of subject matter: one week, the listener would be presented with a chilling ghost story, the next, a hardboiled detective tale. Episodes were adapted from the works of many of the greats of their respective genres, with stories by as diverse a range of writers as Edgar Allan Poe, Raymond Chandler, John Buchan and H. P. Lovecraft.” —OldTimeRadioReview.com