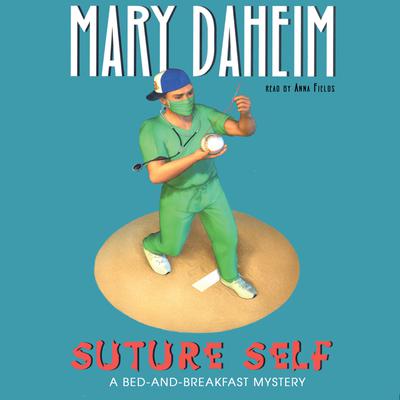 Suture Self: A Bed-and-Breakfast Mystery

Mary Daheim’s wonderful world of Hillside Manor is zany, engrossing, and positively addicting! In Suture Self, Judith McMonigle Flynn is scheduled for a hip replacement. Instead of looking ahead to her new mobility, she’s worried. “Routine surgery” recently cost a local actress and a star baseball pitcher their lives. Though Judith smells malice, she successfully survives her operation—but another patient isn’t so lucky.

Stuck in this chamber of Hippocratic horrors, Judith feels compelled to get to the bottom of what could be the worst malpractice case ever recorded … or perhaps something much more sinister. The worst diagnosis of all is the one that suggests Judith’s curiosity is terminal … and that a killer is saving a last lethal dose of medicine for her.

“Anna Fields performs a top-notch interpretation; she presents this quirky tale with precise yet soothing diction that immerses the listener in the events.” —AudioFile
“There are people who love B&Bs and delight in near-bloodless mysteries. If you’re looking for a get-well present for one of them, Suture Self might be it.” —Amazon.com, editorial review

Mary Daheim started spinning stories before she could spell. She has been a journalist, an editor, a public relations consultant, and a freelance writer, but fiction was always her medium of choice. In 1982 she launched a career that is now distinguished by sixty novels. In 2000 she won the Literary Achievement Award from the Pacific Northwest Writers Association. In October 2008 she was inducted into the University of Washington’s Communication Alumni Hall of Fame. Daheim lives in her hometown of Seattle and is a direct descendant of former residents of the real Alpine, which existed as a logging town from 1910 to 1929, when it was abandoned after the mill was closed. The Alpine/Emma Lord series has created interest in the site, which was named a Washington State ghost town in July 2011. An organization called the Alpine Advocates has been formed to preserve what remains of the town as a historic site.