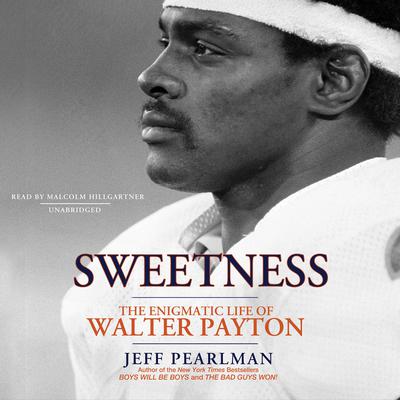 At five feet ten inches tall, running back Walter Payton was not the largest player in the NFL, but he developed a larger-than-life reputation for his strength, speed, and grit. Nicknamed “Sweetness” during his college football days, he became the NFL’s all-time leader in rushing and all-purpose yards, capturing the hearts of fans in his adopted Chicago.

Drawing from interviews with more than seven hundred sources, acclaimed sportswriter Jeff Pearlman has crafted the first definitive biography of Payton. Sweetness at last brings fans a detailed, scrupulously researched, all-encompassing account of the legend’s rise to greatness. From Payton’s childhood in segregated Mississippi, where he ended a racial war by becoming the star of his integrated high school’s football team, to his college years and his thirteen-year NFL career, Sweetness brims with stories of all-American heroism and covers Payton’s life on and off the field. Set against the backdrop of the tragic illness that cut his life short at just forty-five years of age, this is a stirring tribute to a singular icon and the lasting legacy he made.

“Jeff Pearlman does the work of first-rate biography in his addictively readable Sweetness. He presents Walter Payton in all of his flaws and contradictions yet leaves you in the end with a much deeper appreciation of an uncommon man.” —David Maraniss, Pulitzer Prize–winning author
“Walter Payton’s life was thrilling, complicated, triumphant, and turbulent, and it takes an artful storyteller to present it all properly. Thankfully for Payton—and for us, the readers of this splendid book—there is Jeff Pearlman to provide precisely the perfect touch.” —New York Post
“A definitive biography of one of the NFL’s all-time greats…The section on the infamous 1985 Bears, a team rife with dysfunction everywhere but on the field, is a highlight, as is the description of Payton’s senior year in high school, when Mississippi schools were forced to desegregate.” —Kirkus Reviews
“Until now, we’ve known Walter Payton as a two-dimensional figure in football’s pantheon. Jeff Pearlman’s thorough biography, exhaustively researched and compellingly written, shows that beneath the Sweetness lay the raw stuff of mortality. Sweetness is the purest, and most poignant, of portraits.” —Peter Richmond, author of Badasses: The Legend of Snake, Foo, Dr. Death, and John Madden’s Oakland Raiders
“Jeff Pearlman proves once again why he’s one of the best sports biographers in the country. This is easily the most comprehensive look at an historic National Football League figure. Pearlman will tell you things about Walter you didn’t know and he does so in a stylish, informative way.” —Michael Freeman, author of Jim Brown: The Fierce Life of an American Hero
“With Sweetness, Jeff Pearlman joins that small group of men who can claim to have caught up with Walter Payton, with history’s most elusive football player. But Jeff’s the first to make that chase with love in his heart. This book is beautiful.” —Chris Jones, author of Out of Orbit