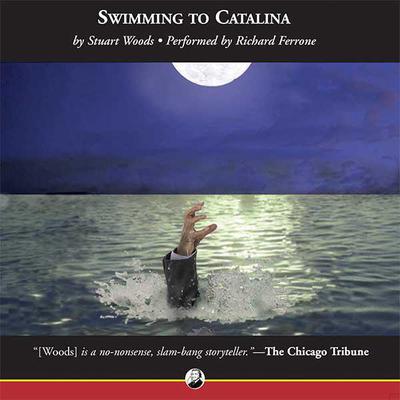 Filled with the dizzying plot twists that have made Stuart Woods' novels New York Times best-sellers, and earned him an enthusiastic international audience, Swimming to Catalina is a spellbinding tour through the treacherous world of fame. Greed, murder, and romance mingle in this glitzy look behind the scenes in Hollywood featuring the resourceful and irresistible detective Stone Barrington. When the wife of hot Hollywood actor Vance Calder vanishes, he calls Barrington for help. Stone soon learns the woman's disappearance is only to gain leverage. A local mob boss wants Calder's movie company, and will stop at nothing to get it. To clear the mobster's path, Stone is strapped to an anchor and dropped into the Pacific Ocean off the coast of Catalina Island. Can Barrington return from the dead to find the missing woman and thwart the lethally hostile takeover? Narrator Richard Ferrone's gravelly voice perfectly accents this savvy look at the seamy, cutthroat world of movies and dangerous Hollywood power plays.