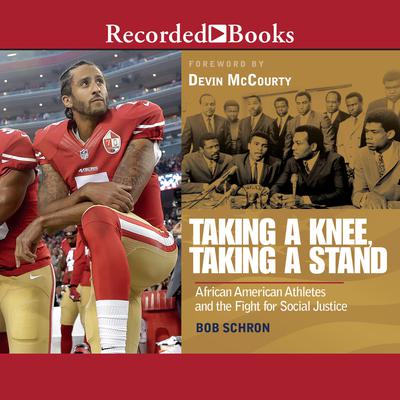 Taking a Knee, Taking a Stand: African American Athletes and the Fight for Social Justice

By Bob Schron  and Devin McCourty
Read by Henry Strozier , with  Mirron Willis

A history of the activism and achievement of African American athletes from Jesse Owens to Serena Williams to Colin Kaepernick, who advanced the cause of social justice through their outspokenness, commitment, and integrity. Muhammad Ali refused to fight in a war he believed was immoral. Wilma Rudolph retired from track and field to campaign for civil rights. Colin Kaepernick took a knee during the national anthem to draw attention to the oppression of black bodies. Taking a Knee, Taking a Stand tells their stories and the stories of other prominent African American male and female athletes who often risked their careers to fight racial discrimination and promote social justice. From Jackie Robinson breaking the color line in major league baseball to NBA great Bill Russell sitting at the feet of Dr. Martin Luther King at the 1963 March on Washington to Althea Gibson asserting her tennis dominance at a time when many clubs would not allow African Americans to play on their courts, this moving and celebratory history shows how the tradition of black protest in sports has been consistent, necessary, and organic, and that the present crisis of misunderstanding and intolerance demands that this tradition continue as the country struggles toward fairness and equity.