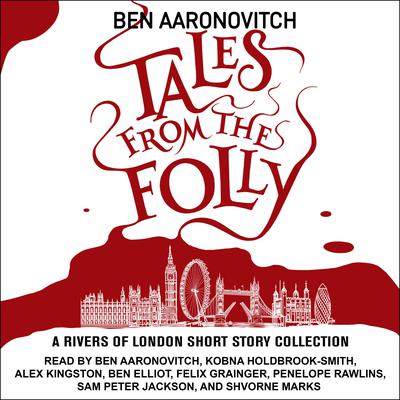 Tales from the Folly: A Rivers of London Short Story Collection

The Rivers of London Series

Return to the world of Rivers of London in this first short story collection from bestselling author, Ben Aaronovitch. Tales from the Folly is a carefully curated collection that gathers together previously published stories and brand new tales in the same place for the first time.

Each tale features a new introduction from the author, filled with insight and anecdote offering the listener a deeper exploration into this absorbing fictional world. This is a must-listen for any Rivers of London fan.

Join Peter, Nightingale, Abigail, Agent Reynolds, and Tobias Winter for a series of perfectly portioned tales. Discover what's haunting a lonely motorway service station, who still wanders the shelves of a popular London bookshop, and what exactly happened to the River Lugg . . .

With an introduction from internationally bestselling author of the Sookie Stackhouse series, Charlaine Harris.

Ben Aaronovitch was born in London in 1964 and had the kind of dull, routine childhood that drives a man either to drink or to science fiction. He is a screenwriter, with early notable success on BBC’s legendary Doctor Who, for which he wrote some episodes now widely regarded as classics, and which even he is quite fond of. After a decade of such work, he decided it was time to show the world what he could really do, and he embarked on his first serious original novel. The result was Midnight Riot, the debut adventure of Peter Grant, followed by Moon over Soho and Whispers under Ground.