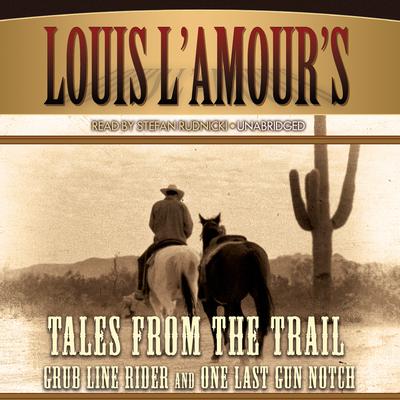 Tales from the Trail

Most folks would call Kim Sartain an easygoing, peace-loving man. But the few who crossed the young drifter knew there was nothing he liked better than a good fight. When cattleman Jim Targ challenges Sartain's right to ride across an unclaimed stretch of meadow, Sartain decides he'll do better than ride through; he'll put down stakes there and homestead the land. Soon there's more at risk than land and pride when Targ hires a gunman to teach Sartain a permanent—and deadly—lesson.

Morgan Clyde had been happy working his small ranch until he was driven off of it by a hired gunman. Clyde found odd jobs here and there but soon found himself being hired to use his gun. Now he's working for a land hog in Red Basin who wants a young homesteader and his wife driven off. The scenario is too familiar, and Clyde finds he must make a hard decision.

“A strong case can be made that L’Amour was the most popular American writer of the twentieth century…His books embody heroic virtues that seem to matter now more than ever.” —Wall Street Journal
“L’Amour is the kind of storyteller who makes the wolves come out of the woods to listen.” —People
“[L’Amour’s] characterizations, attention to detail, and well-placed surprises make his writing continue to resonate after half a century.” —AudioFile
“L’Amour never writes with less than a saddle creak in his sentences and more often with a desert heatwave boiling up from a sunbaked paragraph. A master storyteller…for reading under the stars.” —Kirkus Reviews