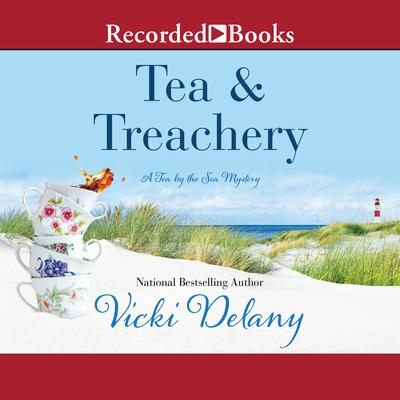 The Tea by the Sea Mysteries: Book 1

In this charming new cozy mystery series from national bestselling author Vicki Delany, a New York City expat-turned-Cape Cod tea shop owner must solve the murder of a local real estate developer to help her feisty grandmother out of a jam.

As the proud proprietor and head pastry chef of Tea by the Sea, a traditional English tea room on the picturesque bluffs of Cape Cod, Lily Roberts has her hands full, often literally. But nothing keeps her busier than steering her sassy grandmother, Rose, away from trouble. Rose operates the grand old Victorian bed-and-breakfast inn adjacent to Lily’s tea shop—for now, that is. An aggressive real estate developer, Jack Ford, is pushing hard to rezone nearby land, with an eye toward building a sprawling golf resort, which would drive Rose and Lily out of business.

Tempers are already steaming, but things really get sticky when Ford is found dead at the foot of Rose’s property and the police think she had something to do with his dramatic demise. Lily can’t let her grandmother get burned by a false murder charge. So she starts her own investigation and discovers that Ford has been brewing bad blood all over town, from his jilted lover to his trophy wife to his shady business partners. Now, it’s down to Lily to stir up some clues, sift through the suspects, and uncover the real killer before Rose is left holding the tea bag.

“Former Manhattan pastry chef Lily Roberts [is] the heroine of this well-crafted series launch…Along the way to the satisfying solution, the women find time to consume a variety of tearoom delicacies. Fans of culinary cozies will be sure to come back for more.” —Publishers Weekly

Vicki Delany is one of Canada’s most prolific and varied crime writers and a national bestselling author in the United States. She writes novels in four cozy mystery series: the Tea by the Sea mysteries, the Sherlock Holmes Bookshop series, the Year-Round Christmas mysteries and, as Eva Gates, the Lighthouse Library series. She is the recipient of the 2019 Derrick Murdoch Award for contributions to Canadian crime writing, and her work has been nominated for the Derringer, the Bony Blithe, the Ontario Library Association Golden Oak, and the Arthur Ellis awards. She is a past president of Crime Writers of Canada and a co-organizer of Women Killing It, a crime writing festival.