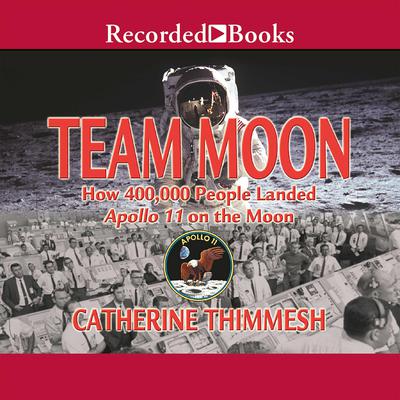 When three heroic men traveled aboard the Apollo 11 spacecraft bound for the moon, the entire world sat glued to their television sets in suspense. But few knew just how much it took to get that far. To put a man on the moon, thousands of people diligently worked behind the scenes. Countless preparations had to be made and no detail, however small, could be overlooked-the lives of the crewmen were at stake. From the seamstresses who wove the multi-layered materials for the spacesuits, to the computer experts who designed and tested the flight software, the combined efforts of many little-known heroes helped make this monumental endeavor a success. Based on NASA transcripts and national archives, this 2007 ALA Best Book for Young Adults by Catherine Thimmesh received starred reviews from both Publishers Weekly and Kirkus Reviews. Narrator Andy Paris lends her talents to this triumphant story of the race to the moon. "This beautiful and well-documented tribute will introduce a new generation to that triumphant time."-Kirkus Reviews, starred review

Catherine Thimmesh is the Sibert Medal–winning author of Team Moon. She lives in Minneapolis, Minnesota, with her family.