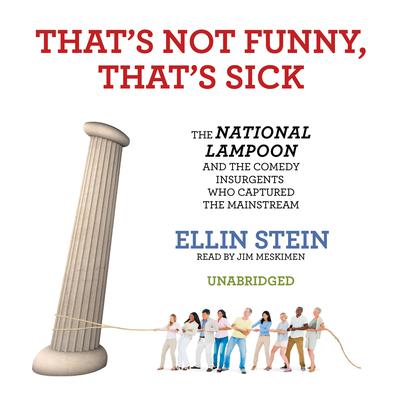 That’s Not Funny, That’s Sick: The National Lampoon and the Comedy Insurgents Who Captured the Mainstream

The untold story behind a revolution in American comedy

Labor Day, 1969. Two recent college graduates move to New York to edit a new magazine called the National Lampoon. Over the next decade, Henry Beard and Doug Kenney, along with a loose amalgamation of fellow satirists such as Michael O'Donoghue and P. J. O'Rourke, popularized a smart, caustic, ironic brand of humor that has become the dominant voice of American comedy.

Ranging from sophisticated political satire to broad raunchy jokes, the National Lampoon introduced iconoclasm to the mainstream, selling millions of copies to an audience both large and devoted. Its excursions into live shows, records, and radio helped shape the anarchic earthiness of John Belushi, the suave slapstick of Chevy Chase, and the deadpan wit of Bill Murray and brought them together with other talents such as Harold Ramis, Christopher Guest, and Gilda Radner. A new generation of humorists emerged from the crucible of the Lampoon to help create Saturday Night Live and the influential film Animal House, among many other notable comedy landmarks.

Journalist Ellin Stein, an observer of the scene since the early 1970s, draws on a wealth of revealing firsthand interviews with the architects and impresarios of this comedy explosion to offer crucial insight into a raucous cultural transformation that still echoes today. Brimming with insider stories and set against the roiling political and cultural landscape of the 1970s, That's Not Funny, That's Sick goes behind the jokes to witness the fights, the parties, the collaborations—and the competition—among this fraternity of the self-consciously disenchanted. Decades later, their brand of subversive humor that provokes, offends, and often illuminates is as relevant and necessary as ever.

“Journalist Stein offers detailed portraits of the people behind [National Lampoon’s] success in a seminal time when politics and comedy intertwined with incendiary results…It is the untold story that resonates the most, the secret history of a profession that, like the late comedian Rodney Dangerfield, doesn’t get the respect that it deserves. A serious treatment of a funny topic.” —Booklist

Ellin Stein has contributed arts features and criticism to such publications as London’s Times, Guardian, and Telegraph, as well as the New York Times and Variety. She lives in London.