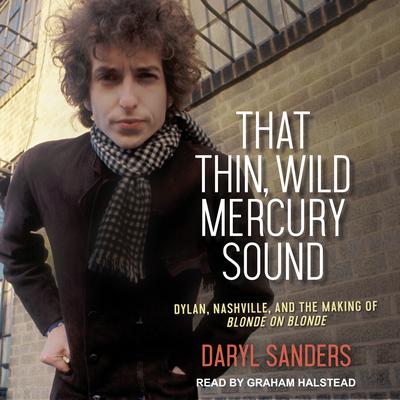 That Thin, Wild Mercury Sound: Dylan, Nashville, and the Making of Blonde on Blonde

That Thin, Wild Mercury Sound is the definitive treatment of Bob Dylan's magnum opus, Blonde on Blonde, not only providing the most extensive account of the sessions that produced the trailblazing album, but also setting the record straight on much of the misinformation that has surrounded the story of how the masterpiece came to be made. Including many new details and eyewitness accounts, as well as keen insight into the Nashville cats who helped Dylan reach rare artistic heights, it explores the lasting impact of rock's first double album. Based on exhaustive research and in-depth interviews with the producer, the session musicians, studio personnel, management personnel, and others, Daryl Sanders chronicles the road that took Dylan from New York to Nashville in search of "that thin, wild mercury sound." As Dylan told Playboy in 1978, the closest he ever came to capturing that sound was during the Blonde on Blonde sessions, where the voice of a generation was backed by musicians of the highest order.

A must for Dylan fans or fans of great music. —AudioFile
“Daryl Sanders is a diligent researcher and interviewer, driven by his own passion for Dylan’s work and the then-ripening Nashville music world that was a near perfect setting for Dylan in 1966. More than the story of making a record album, That Thin, Wild Mercury Sound is about learning the rules of a complicated profession, and then smashing many of them. Several generations of rock singers, musicians, critics, historians, and fans will be grateful for this book. I know I am.” —Dave Marsh, New York Times bestselling author
“This incredible audiobook tells in microscopic detail how and why the historic Bob Dylan album Blonde on Blonde was made in Nashville. It’s a must for Dylan fans or fans of great music. Narrator Graham Halstead takes listeners through the process of recording Dylan’s masterpiece, every track, even those that were not used. He explains why there is a Salvation Army band on “Rainy Day Women #12 and 35” and why Dylan breaks up laughing on the recording. The only thing that would make this audiobook better would be a soundtrack of the album.” —AudioFile
“That Thin, Wild Mercury Sound unravels the unlikely story of one of folk-rock’s milepost albums with clarity and passion.” —Richie Unterberger, author of Turn! Turn! Turn!

Daryl Sanders is a music journalist based in Nashville and is one of the foremost authorities on the city’s extensive rock and soul history. Sanders has been the editor of a number of magazines covering “the other side of Music City” dating back to the late ‘70s, including Hank, the Metro, and Bone. He has also written for Performance, the Tennessean, Nashville Scene, City Paper (Nashville), the East Nashvillian, and the Nashville Musician. While his focus has been on music coming out of Nashville, in a career spanning nearly four decades Sanders also has interviewed many legendary rock, soul, and jazz artists not associated with the city, including Frank Zappa, Tom Petty, Joan Baez, Billy Gibbons, Robert Palmer, J. J. Cale, Al Kooper, the Neville Brothers, Betty Carter, Gary Burton, John Handy, Ian Astbury, and Cassandra Wilson.