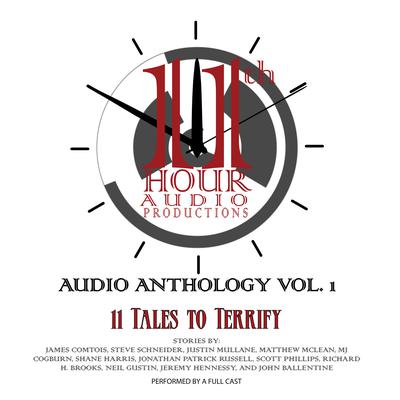 Plays by various authors
Performed by a full cast

The 11th Hour Audio Anthology is a collection of eleven macabre tales created by masters of modern audio drama to haunt and terrify you.

Intensive Care by James Comtois
Alex Ericson is checked into a New England Hospital after a major car accident. The more he wakes up, the more Alex realizes his condition is more critical than he could ever believe.

Heavenly Deception by Steve Schneider
When Prudence reunites with her older sister Zara after 18 months, their reunion is interrupted in a sudden, drastic and life-altering manner.

Kill the Boy by Scott Phillips
A boy and his mother acclimate to their new life in a small town when something sinister begins to unravel.

A Dread Light Shines in the Serpent’s Sky by Scott Phillips
A crew of pirates down on its luck finds a merchant ship and believe their luck to be changing for the better. Their bad luck is only getting worse.

Cargo by Matthew Mclean
A small group of humans awake on board an alien spacecraft.

Vultures Over Low Doves by Justin Mullane
A young man’s life unravels into terror under the influence of his therapist twisted plans.

Monster’s Game by John Ballentine
A young man battling schizophrenic demons from his past hears a new sinister new in his earbuds with murderous intentions.

The Martyr Protocol by Jeremy Hennessy and Scott Phillips
Six android beings must cope with what it means to be human and the terror that goes along with it.

The Hooded Figure by MJ Cogburn, Shane Harris, and Jonathan Russell
Sometimes, you can inherit many things from your family—what happens when it’s more than just objects or monetary gain?

Shadows of Halloween by Neil Gustin
On Halloween night four friends gather together and discover that some traditions are all too real.

Ivory Towers by Richard H. Brooks
Oxford students Thomas and Roger, try to impress Agnes, a young woman from town, by breaking into the master’s study for a late-night drink. Soon enough the students begin to question how well they know their new-found friend.

Jeremy Hennessy is a member at Audioblivious. He does writing, voice acting, directing, and brainstorming. He lives in Cincinnati.

Neil Gustin is writer, producer, and creator at Twilight Audio Theatre, but absolutely not an actor. These days most of his audio-drama time is filled producing shows for Colonial Radio Theatre on the Air, such as ’s Ticonderoga, Powder River, and The Adventures of Sergeant Billy and Corporal Sam.

Richard H. Brooks is a short-story author and has written in a number of national publications on the revival of audio drama including in the Independent, the Week and the Conversation, as well as for Podcast Host. Ivory Towers is his debut audio drama script.

Scott Phillips was born and raised in Wichita, Kansas, and lived for many years in France. He now lives with his wife and daughter in Southern California.

MJ Cogburn is a retired English special education teacher who loves making audio for everyone. She runs Darker Projects and works with Colonial Radio Theatre with Jerry Robbins. She’s been doing audio for eleven years and will continue to work on audio as long as she can. She also acts for many audio productions.

Matthew McLean is the creator of A Scottish Podcast and founder of the Audio Drama Production Podcast.

Justin Mullane is a western New York native with a keen interest in the absurdity and the idiosyncrasies of modern life, which he translates into his storytelling. His works include Vultures over Low Doves and the upcoming audio drama serial Otherworldlies.

John Ballentine is a Parsec Award–winning writer of dark fiction, horror, sci-fi, and action adventure. He is currently creator and producer of the horror audio-drama podcast Campfire Radio Theater.