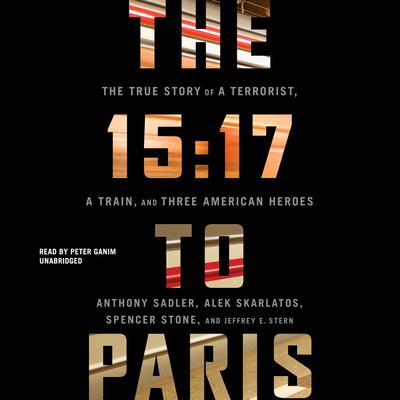 The 15:17 to Paris: The True Story of a Terrorist, a Train, and Three American Heroes

On August 21, 2015, Ayoub al-Khazzani boarded the 15:17 train in Brussels, bound for Paris. Khazzani’s mission was clear: he had an AK-47, a pistol, a box-cutter, and enough ammunition to obliterate every passenger on the crowded train. Slipping into the bathroom in secret, he armed his weapons and prepared to launch his attack.

But when he emerged, he encountered something he hadn’t anticipated: three Americans who refused to give in to fear.

Anthony Sadler, Alek Skarlatos, and Spencer Stone were childhood friends, taking a vacation together. They had some relevant training: Stone was a martial arts enthusiast and Airman First Class in the US Air Force; Skarlatos was an active duty member of the Oregon National Guard; and not one of the three was afraid of a fight. But their decision-to charge the gunman, then overpower him even as he turned first his gun, then his knife on Stone-would never have happened if they hadn’t had a lifetime of trust, support, and loyalty between them.

This audiobook is the gripping, true story of a terrorist attack that would have killed more than 500 people if not for their actions, but it is also the story of three American boys and their friendship.
Using each hero’s point of view in sequence, The 15:17 to Paris skillfully builds the drama of the attack, while weaving in the stories of the protagonists’ lives, the friendship and loyalty that would come to define them, and the events that led them, inexorably, to that fateful day.

The 15:17 to Paris is an amazing true story of unparalleled, unexpected courage, and people coming together against fear rather than splitting apart. It is a story of near tragedy averted by three young men who found the heroic unity and strength inside themselves that we all aspire to.

“[A] nuanced portrait…Up-close moments, flashbacks throughout the chronological memoir, make for a compelling ride…into the minds of our three heroes.” —Washington Post
“Captivating…exciting and gripping…Their actions seem to prove the old adage that heroes are almost always ordinary people who, when confronted with great challenges, respond in an extraordinary fashion. How wonderful to be reminded that all of us have such a capacity.” —Christian Science Monitor
“[Anthony Sadler, Alek Skarlatos, and Spencer Stone] demonstrated remarkable bravery and acted without regard for their own safety in order to subdue a heavily armed individual who appeared intent on causing mass casualties…[T]heir heroic actions may have prevented a far worse tragedy.” —President Barack Obama
“[Anthony Sadler, Alek Skarlatos, and Spencer Stone] gave us a lesson in courage, in will, and thus in hope…Faced with the evil called terrorism there is a good, that is humanity. [They] are the incarnation of that.” —French President Francois Hollande
“The courage and selflessness these men displayed was nothing short of heroic. Their disregard for their own safety and quick action to disarm and subdue the gunman saved lives. We owe them a debt of gratitude.” —Senator Dianne Feinstein

Anthony Sadler is a senior at Sacramento State University, majoring in kinesiology and athletic training.

Alek Skarlatos is a Specialist in the Oregon National Guard. A former student of Umpqua Community College, he was recently a finalist on season 21 of Dancing with the Stars. He lives in Roseburg, Oregon.

Spencer Stone is a Staff Sergeant in the United States Air Force. He lives in Sacramento.

Jeffrey E. Stern has been named both a Pulitzer Center Fellow for Crisis Reporting, and a Graduate Fellow at the Stanford Center for International Conflict and Negotiation. Stern’s reporting has appeared in Vanity Fair, Esquire, Foreign Policy, the Atlantic, Newsweek, Slate, Time, and the New Republic.