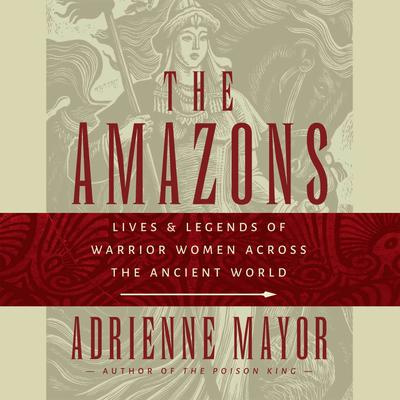 The Amazons: Lives and Legends of Warrior Women across the Ancient World

Amazons—fierce warrior women dwelling on the fringes of the known world—were the mythic archenemies of the ancient Greeks. Heracles and Achilles displayed their valor in duels with Amazon queens, and the Athenians reveled in their victory over a powerful Amazon army. In historical times, Cyrus of Persia, Alexander the Great, and the Roman general Pompey tangled with Amazons.

But just who were these bold barbarian archers on horseback who gloried in fighting, hunting, and sexual freedom? Were Amazons real? In this deeply researched and wide-ranging audiobook, National Book Award finalist Adrienne Mayor presents the first comprehensive account of warrior women in myth and history across the ancient world, from the Mediterranean Sea to the Great Wall of China.

Combining classical myth and art, nomad traditions, and scientific archaeology, she reveals surprising details and original insights about the lives and legends of the women known as Amazons.

“An encyclopedic study of the barbarian warrior women of Western Asia, revealing how new archaeological discoveries uphold the long-held myths and legends. The famed female archers on horseback from the lands the ancient Greeks called Scythia appeared throughout Greek and Roman legend. Mayor tailors her scholarly work to lay readers, providing a fascinating exploration into the factual identity underpinning the fanciful legends surrounding these wondrous Amazons…Mayor clears away much of the man-hating myths around these redoubtable warriors. Thanks to Mayor’s scholarship, these fearsome fighters are attaining their historical respectability.” —Kirkus Reviews

Adrienne Mayor is the author of Greek Fire, Poison Arrows, and Scorpion Bombs: Biological and Chemical Warfare in the Ancient World and The First Fossil Hunters: Paleontology in Greek and Roman Times. She is a research scholar in classics and history of science at Stanford University.