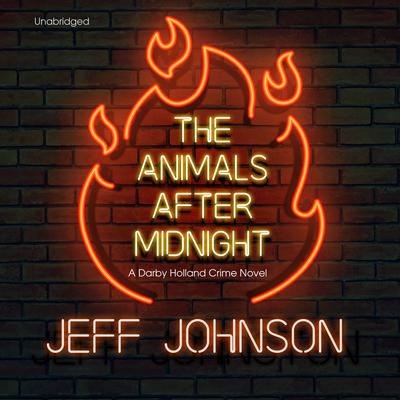 The Animals after Midnight: A Darby Holland Crime Novel

In this third novel in the Darby Holland Crime Novel series, Darby’s past rises up to do more than haunt him. You can run, but in the information age you can only hide for so long.

Midnight Rider Productions is a dark-web nightmare machine, headed by the one man who years ago drove Darby to hide in the seamy environs of Old Town and make his life there. But Darby left his own mark back in the day and the shadowy head of production has a grudge to settle. Rider has found him at long last and plans to make an example of him.

Every dark secret of Darby’s is exposed, every triumph reversed, every dream made real is set on fire, and as the Feds circle, smelling blood in the water, Darby has to run the most brutal rear-guard action in the history of crime-meets-crime and gamble that he has finally grown powerful enough, crazy enough, and hard enough to beat the Devil himself.

Meanwhile his best friend and should-be lover Delia, is about to be married to someone with his own dark secrets. With the help of his friends new and old, Darby must save Delia and himself and the rest of the Lucky Supreme faithful as he plays one force against another with desperate brilliance in an epic conflict that rages through the dark underbelly of Portland, Oregon.

“This is a really good book full of bad people you’ll sorely miss as soon as you’re not reading about them anymore.” —Thomas Perry, New York Times bestselling author
“Johnson’s engrossing third novel featuring the Portland, Oregon, tattoo parlor and strip-club owner…Elmore Leonard fans should be pleased.” —Publishers Weekly
“There is one Portland, Oregon, that is marked by polite, gentrified civility, and then there’s its fever-dream, noir-drenched opposite, a dimension reached by walking out the back door of the Lucky Supreme, the Old Town tattoo parlor dreamed up by Jeff Johnson and overseen by master tattooist Darby Holland, another mind-altering creation of Johnson’s. In this universe, the good guys come from the side-show tents, the bad guys have escaped from the cages, and the mayhem is managed by a ringmaster with a surgeon’s touch and a comic’s timing. Bravo.” —Les Standiford, author of Last Train to Paradise

Jeff Johnson burst onto the literary scene in 2009 with his critically lauded memoir Tattoo Machine: Tall Tales, True Stories, and My Life in Ink filled with stories from his thirty-year career as a tattoo artist in the Pacific Northwest. Johnson is now a full-time writer, artist, and film maker. He is the author of a modern twist on a werewolf tale, Everything under the Moon; the Darby Holland crime series novels, Lucky Supreme and A Long Crazy Burn; the Philadelphia noir Deadbomb Bingo Ray, and the offbeat Knottspeed, A Love Story.