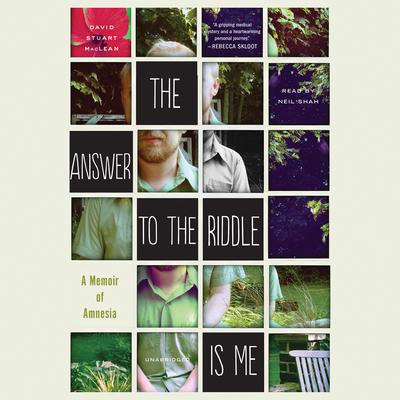 The Answer to the Riddle Is Me: A Memoir of Amnesia

Imagine waking up in a train station in India with no idea who you are or how you got there. This is what happened to David MacLean.

In 2002, at age twenty-eight, David MacLean woke up in a foreign land with his memory wiped clean. No money. No passport. No identity.

Taken to a mental hospital by the police, MacLean then started to hallucinate so severely he had to be tied down. Soon he could remember song lyrics and scenes from television shows but not his family, his friends, or the woman he loved. All of these symptoms, it turned out, were the result of the commonly prescribed malarial medication he was taking. Upon his return to the States, he struggled to piece together the fragments of his former life in a harrowing, absurd, and unforgettable journey back to himself.

A deeply felt, closely researched, and intensely personal book, The Answer to the Riddle Is Me, drawn from MacLean's award-winning This American Life essay, confronts and celebrates the dark, mysterious depths of our psyches and the myriad ways we are all unknowable, especially to ourselves.

“A gripping medical mystery, a heartwarming personal journey, and a chilling indictment of the commonly prescribed drug that upended MacLean’s life—but left his superb literary skills intact.” —Rebecca Skloot, New York Times bestselling author
“A mesmerizing, unsettling memoir about the ever-echoing nature of identity—written in vivid, blooming detail.” —Gillian Flynn, New York Times bestselling author
“Brilliant and painful and hilarious.” —Antonya Nelson, New York Times bestselling author
“The book comprises short chapters of one to several pages, presumably to reflect the staccato-like manner in which memories returned. Swaths of cultural and biological history of malaria are woven throughout…MacLean ends on a redemptive note…[This] tale of triumph in the search for identity…dramatic and unique…succeeeds impressively.” —New York Times Book Review
“Much of the memoir’s power comes from MacLean’s intense descriptions of the altered states he endured as he tried to rediscover his identity…A mesmerizing debut. MacLean spares no detail in tracing his formidable reconstruction.” —Kirkus Reviews (starred review)
“MacLean fearlessly explores his journey to the edge of madness and his subsequent return to sanity in an unsettling, sometimes riotous, memoir…The uneasy peace he attains grows stronger by the end of the book, when it’s oddly cheering to read ‘everyday crazy is something I can handle.’” —Publishers Weekly
“Neil Shah’s smooth voice is perfect for MacLean’s introspective memoir…Shah grasps MacLean’s utter confusion and panic during the horrific hallucinations he experienced, caused by an antimalarial drug. Shah flawlessly simulates the Indian accents of those who tried to help solve the mystery of MacLean’s identity and why he was in India. The story is both captivating and thought provoking as MacLean rediscovers his personality, his past, and his present. Having someone else vocalize this memoir adds to the sense of an author who has lost his sense of self.” —AudioFile
“A spare and unflinching memoir that takes the reader along on MacLean’s messy, one-step-forward, two-steps-back recovery…It is haunting on two fronts: His brutally honest recounting of his journey to the brink of suicide and back, and the questions he raises about the use of Lariam in the US military despite its record of serious side effects.” —BookPage
“Both a sharply written autobiography and an insightful meditation on how much our memories define our identities.” —Booklist

David Stuart MacLean is a PEN American Award–winning writer. His work has appeared in Ploughshares and on the radio program This American Life. He has a PhD from the University of Houston and is a cofounder of the Poison Pen Reading Series. He lives in Chicago with his wife.