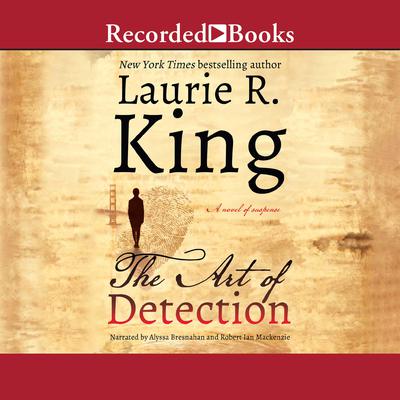 The Art of Detection

In this thrilling new crime novel that ingeniously bridges Laurie R. King's Edgar and Creasey Awards-winning Kate Martinelli series and her bestselling series starring Mary Russell, San Francisco homicide detective Kate Martinelli crosses paths with Sherlock Holmes-in a spellbinding dual mystery that could come only from the "intelligent, witty, and complex" mind of New York Times bestselling author Laurie R. King. Kate Martinelli has seen her share of peculiar things as a San Francisco cop, but never anything quite like this: an ornate Victorian sitting room straight out of a Sherlock Holmes story-complete with violin, tobacco-filled Persian slipper, and gunshots in the wallpaper that spell out the initials of the late queen. Philip Gilbert was a true Holmes fanatic, from his antiquated dEcor to his vintage wardrobe. And no mere fan of fiction's great detective, but a leading expert with a collection of priceless memorabilia-a collection some would kill for. And perhaps someone did: In his collection is a century-old manuscript purportedly written by Holmes himself-a manuscript that eerily echoes details of Gilbert's own murder. Now, with the help of her partner, Al Hawkin, Kate must follow the convoluted trail of a killer-one who may have trained at the feet of the greatest mind of all times.

“Fans of Martinelli will find much to enjoy…[Martinelli's] contented home life contrasts nicely with the grim details of her job.” —Seattle Times
“Cohesive, compelling, wildly original…King works the story-within-a-story concept exceptionally well. But the best thing about The Art of Detection is Kate…and the book’s upbeat and hugely satisfying ending reminds us that there are simply not enough Kate Martinelli books to go around.” —Miami Herald
“Sometimes a mystery takes one’s breath away with its impeccable, inexorable logic. King makes two such tales here, whose wheels interlock with a perfect, audible click…A tour de force and a great read.” —Booklist (starred review)
“Bestseller King meshes her two best-known series—contemporary police procedurals set in San Francisco featuring Kate Martinelli of the SFPD and the period stories of Mary Russell and her husband, Sherlock Holmes—to create an intelligent, satisfying novel of suspense…Fans of both series will be well rewarded.” —Publishers Weekly