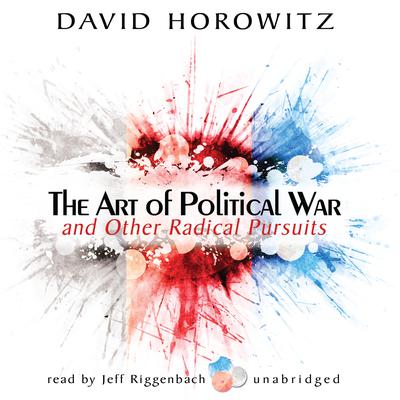 The Art of Political War and Other Radical Pursuits

Politics is war; but in America, one side is doing all the shooting—the liberals. Shell-shocked conservatives blame their failures on the media or on unscrupulous opponents, but they refuse to name the real culprit: themselves.

In a book that will shatter the complacency of establishment conservatives, David Horowitz shows how Bill Clinton's generation, having mastered the art of political war, has spent the last ten years clobbering the conservatives in and out of government. The bestselling author of Hating Whitey and Other Progressive Causes has the strategy to fight back.

“A blunt, savvy, Machiavellian manual on the art of political campaigning…Reveals Horowitz as an independent, rigorous, outspoken political analyst.” —Publishers Weekly
“Jeff Riggenbach’s bass voice is clear and strong, and he reads Horowitz’s sometimes complex, highly charged rhetoric with ease, the right pace, and the right interpretation. The section on race politics is especially provocative.” —AudioFile

David Horowitz grew up a “red diaper baby” in a communist community in Sunnyside, Queens. He studied literature at Columbia, taking classes from Lionel Trilling, and became a “new leftist” during the Soviet invasion of Hungary in 1956.